Of interest to the field of CO2 utilization is the adaptation of the above described energy storage system into one capable of fixing CO2 into a useful product, in this particular case carbon. 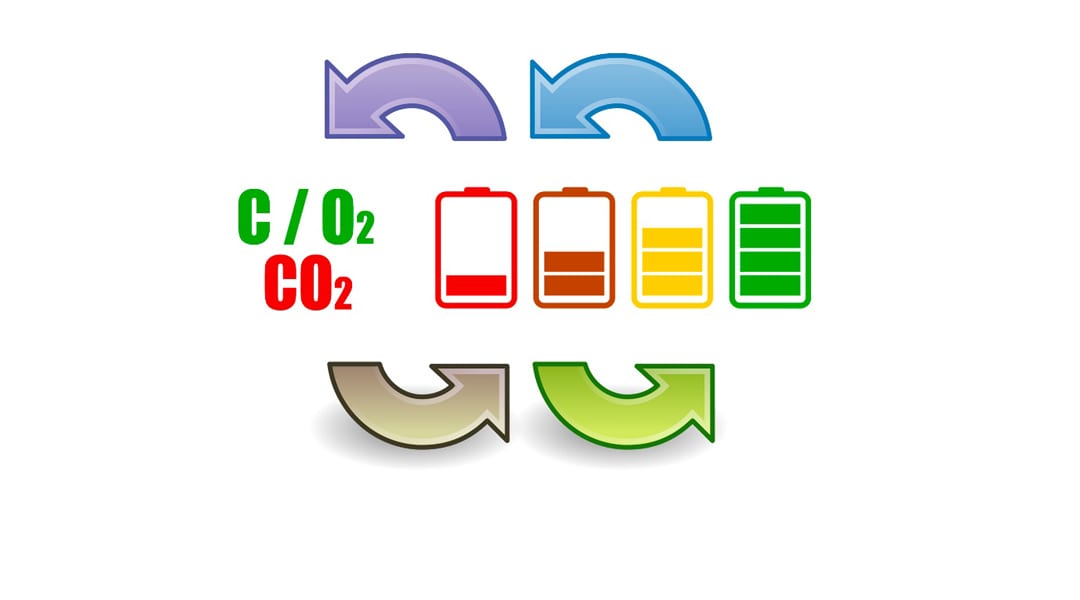 Two centuries later, the battery, invented by Alessandro Volta in 1800, has become an indispensable part of our lives. In brief, a battery is an electrochemical device that converts stored chemical energy into electrical energy. A battery comprises two electrodes, a cathode and an anode, and an electrolyte contained between. The battery operates by the movement of ions between the electrodes, which produces a concomitant flow of charge out of the battery to an external electrical circuit to perform useful work.

Sony and Asahi Kasei produced the first commercial lithium-ion battery in 1991. First used in consumer products, they have since evolved to power personal electronics and electric vehicles, as well as larger format cells in energy storage applications, such as kilowatt-hour rooftop solar cells for residential systems and megawatt-hour devices for electrical grid servicing.

Lithium ion batteries, depending on required specifications, embrace a wide range of different chemistries. They all work, however, on the same principle: by transferring lithium ions between the anode and cathode electrodes in charging and discharging reactions. Typically, the lithium is part of a composite anode. On discharge, lithium-ions generated at the anode diffuse through a lithium-ion polymer electrolyte to the cathode made of materials such as metal oxides or phosphates, sulfur or oxygen, into which they insert and/or react. To complete the process, charge-balancing equivalents of electrons transfer from the anode to the cathode through the external circuit.

This is how conventional lithium-ion batteries discharge and convert chemical into electrical energy. By reversing the above electrochemical process through the application of an external voltage bias, the battery recharges, ready for use and recycling. 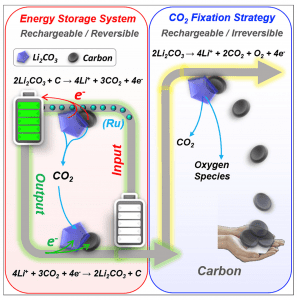 With this very basic understanding of the physicochemical principles underpinning the operation of a lithium-ion battery, it is interesting to contemplate what could happen if the cathode electrochemistry was orchestrated to somehow involve CO2.

One possibility on discharge is the formation of lithium carbonate and carbon at the cathode illustrated in Figure 1 and described by the following redox reaction:

Using a ruthenium based catalytic cathode, it is possible to reverse the electrochemical process as described by the redox equation:

This can cycle back-and-forth between the anode and cathode using an aprotic electrolyte comprising a solution of CO2 saturated 0.5m LiClO4-DMSO. The choice of dimethyl sulfoxide DMSO as solvent for this electrochemical device was based on its high conductivity, low viscosity and relatively high CO2 solubility.

Of interest to the field of CO2 utilization is the adaptation of the above described energy storage system into one capable of fixing CO2 into a useful product, in this particular case carbon.

The fixation strategy exploits the irreversible anodic redox reaction, illustrated in Figure 1 and described by the equation:

The overall electrochemical process occurring in this energy storage-carbon dioxide fixation system can be described by the redox equation:

Therefore, one-third of the CO2 reactant in the cell converts to product C, with an accompanying mole equivalent of evolved O2. Whether these are useful CO2-based products that can influence climate change, remains an open question.

It is worth mentioning that a remaining challenge in this work concerns the instability of the aprotic LiClO4-DMSO electrolyte. During charging, reduced oxygen species, such as superoxide, formed by the decomposition of Li2CO3, cause deleterious oxidation of the solvent DMSO to DMSO2. This issue, common also in Li-air batteries, is the lack of any stable solvents that can dissolve lithium salts.

While the research is still in the proof-of-concept stage, the Li-CO2 battery provides an interesting paradigm from which to develop large-scale electrochemical systems to not only store renewable energy but also convert carbon dioxide greenhouse emissions to value-added products.

Temporary light-emitting tattoos, anyone?
Pioneers in Science: Millie Dresselhaus
Predicting Rechargeable Battery Performance with Machine Learning
Why is there hype around the Novavax COVID-19 vaccine?