Noise level in passenger compartment of Mi 8 lowered from 85 to 80 decibels through use of melamine foam. 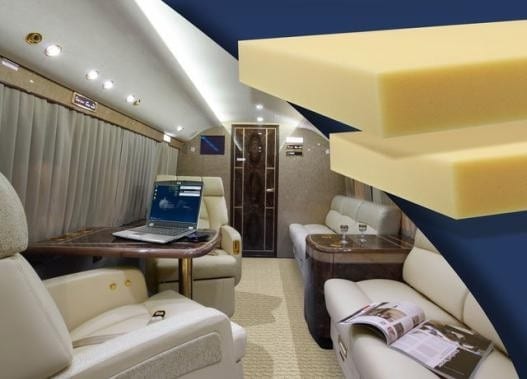 Hearing protection is no longer needed thanks to Basotect, the open-celled melamine foam from BASF: Passengers can leave hearing protection behind when boarding a luxurious version of the Russian Mi 8 helicopter. The helicopter, which is over 25 meters long and is used for passenger transport, has been equipped with an improved sound insulation system and is currently ready for flight.

Vemina-Aviaprestige, headquartered in Moscow, is the company responsible for all interior furnishings of the helicopter. They opted for a custom-fit insulation system with Basotect. This special foam is affixed to selected noise intensive points at a thickness of 40 millimeters. It is coated on both sides with a water-repellent fleece. The system is produced and fitted by StandartPlast, a provider of acoustic systems solutions for the transport industry.

The outstanding acoustic properties of the special foam were a crucial factor in its selection. While conventional systems were used in the past to insulate against the clatter of the five rotor blades, only Basotect UL has been successful at significantly reducing noise. “The noise level inside the helicopter dropped from 85 to 80 decibels, making the use of hearing protection unnecessary,” explains Sergey Milek, Chief Operations Officer at StandartPlast. The sound insulation system has been tested and certified in accordance with the Russian GOST norm 20296-81, which requires a noise level test to be performed in the passenger compartment at a frequency of one kilohertz.

Reduced weight also played a role in the selection process. StandartPlast uses the lightest version of Basotect. Weighing only six grams per liter, Basotect UL reduces the weight of the helicopter’s sound insulation system by 80 percent. This amounts to 240 kilograms, which allows for an increase in passenger capacity or flight range. Basotect’s excellent fire protection properties were also convincing – that is a basic requirement for the use of such materials in aviation.

Sergey Davydov, Chief Operations Officer at Vemina-Aviaprestige, sees even more potential for the Basotect sound insulation system: “We are convinced by the material’s acoustic properties, and we are currently testing whether the Basotect solution can be implemented with other helicopter models as standard equipment.”

This particular helicopter from the Mi 8 series is manufactured in Kazan, the capital of the Republic of Tartarstan in Russia. The rotor blades have a diameter of around 22 meters, and the helicopter can reach a top speed of 230 to 250 kilometers per hour.