Bacteria engineered to protect bees from pests and pathogens

Using bacteria to combat varroa mites, a common pest that can weaken honey bees and make them more susceptible to pathogens. 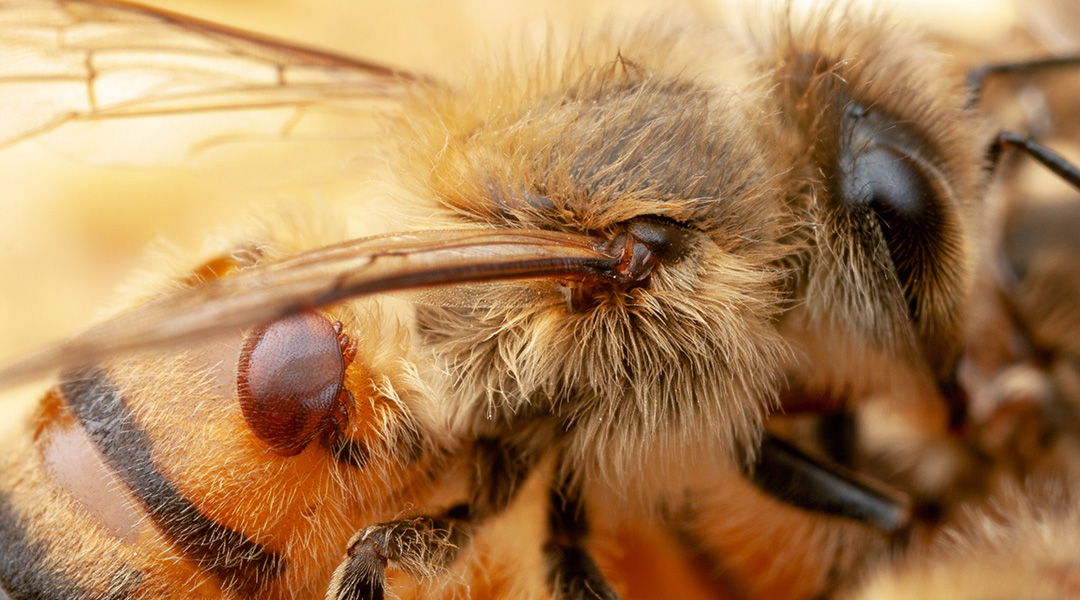 Bees and other pollinators form an integral part of our ecosystem, although recent and substantial declines in their populations are cause for global concern. According to the Bee Informed Partnership’s national survey published last week, beekeepers in the US lost nearly 40% of their honey bee colonies last winter, the highest rate reported since the survey began 13 years ago.

Honey bees contribute nearly 20 billion USD each year to the value of US crop production, as well as playing an enormous role in global food production. Without honey bees, many crops would either become extinct or produce significantly less yields.

Among the many challenges plaguing bee populations is infection by the varroa mite, a common and deadly pest of honey bees. The parasitic mite originates from Asia, and has since spread all over the world, feeding on the body of bees and causing a disease called varroosis. It is also a suspected cause of colony collapse disorder — the phenomenon that occurs when the majority of worker bees in a colony disappear, leaving behind the queen and food.

To combat this infection, scientists from The University of Texas at Austin have developed a new strategy to protect honey bees using genetically engineered strains of bacteria. The bees are inoculated by spraying them with a sugar water solution containing the bacteria and they ingest the solution after grooming one another.

The bacteria then take up residence in the bees’ gut, producing medicines aimed at protecting the bees from Varroa mites as well as the deformed wing virus. The two infections usually occur simultaneously, as the mites weaken the bee’s ability to fight off pathogens.

“This is the first time anyone has improved the health of bees by genetically engineering their microbiome,” added Sean Leonard, a graduate student and first author of the study in a press release.

The bacteria essentially promote an antiviral mechanism called RNA interference (RNAi) that exists inherently in the bees, priming their immune systems to protect them against the two infestations. The immune response occurs when cells detect “RNA viruses” — viruses that use RNA vs. DNA as their genetic material, and produces molecules called double-stranded RNAs that a healthy cells detect, triggering an RNAi immune response.

“You usually only get signs of these molecules when an RNA virus is replicating,” Moran said in the university’s press release. “It’s a signal that this might be an evil thing and you should attack it.”

“While the experiments occurred under strict biocontainment protocols used with genetic engineering”, Moran said, “even absent of such protocols, the risk of the engineered bacteria escaping into the wild and infecting other insects — and thereby conferring some anti-pest or anti-pathogen superpowers — is very low.”

While further research will be needed to determine the effectiveness and safety of the treatments in agricultural settings, this approach shows promise in helping to curb colony collapse and promoting a healthier bee population.