AI is being leveraged to provide machines with the capacity to match or even outperform humans in many endeavors. So what does this mean for the synthetic chemist? 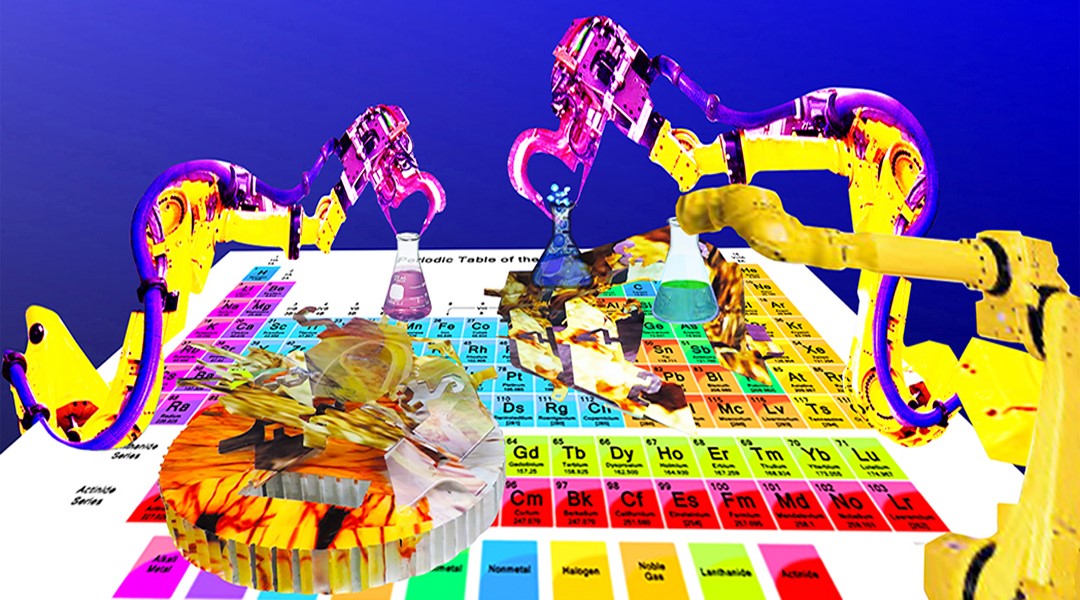 Chemistry has always been regarded as the “central science”, simply because new molecules, polymers, and materials begin their lives in synthetic chemistry laboratories.

In a sense, synthetic chemistry can be viewed as a game of selecting groupings of atoms from more than a hundred elemental building blocks found in the periodic table, and organizing them into different arrangements, dimensions, and scales. Just in the case of organic molecules, it has been estimated that with a molecular weight less than 500 there are around 1060 possibilities. The goal is often to make “stuff” with a particular set of properties, so clearly the number of elemental combinations and application opportunities for molecules, polymers, and materials is endless.

As artificial neural networks have already surpassed human intelligence in winning a game of chess (possible positions and games are around 1050 and 10120, respectively, compared to atoms in the observable universe, which are 1080), can one expect them to outperform synthetic chemists at their age-old game?

You cannot help but notice that artificial intelligence is being leveraged to provide machines with the capacity to match or even outperform humans in many endeavors, exemplified by image and object recognition, voice generation and recognition, pick and place skills, video games, art and style imitation, predictions, and website design modifications. Machines are learning how to do incredible things, as we see in autonomous vehicles, drone delivery, smart homes and phones, industrial assembly, packaging, inspection, quality control, marketing and finance, internet search engines, population surveillance, mass psychological experiments, election interference, and, the topic of this article, chemical synthesis.

Escape from the age of alchemy was made possible by Dmitri Mendeleev. Possibly the most important contribution to chemistry was his periodic table, through which we have the organization of the known elements by atomic number, electron configuration, and trends in chemical properties. This feat of human ingenuity took around a century of trial-and-error experimentation. In stark contrast, Stanford University researchers recently used artificial intelligence to discover the same periodic table of the elements from scratch in a matter of a few hours.

From alchemy, the medieval ancestor of chemistry, to modern chemistry, most practitioners interested in the art and science of discovering molecules, polymers, and materials have employed tried-and-true approaches based on human intelligence and experiential learning. When the baby-boomer generation (of which I am one) began their careers in the field of chemistry, synthesis was serial in nature, time intensive yet with time to think about what one was doing and why one was doing it. The mantra of chemistry — synthesis, structure, properties, function, and utility — has not changed much today, whether one’s passion is molecule, polymer, or materials discovery.

Around the late 1980s to early 1990s, combinatorial chemistry emerged as a way to perform parallel chemical synthesis to overcome the bottleneck of traditional serial methods. Large libraries of molecules, polymers, and materials were made in automated synthesis equipment and rapid scan, multi-analytical analytical methods were developed to determine their structures and measure their properties in order to optimize a desired function for a particular application.

It is not exactly clear whether the exciting potential of combinatorial chemistry research and development in the 1990s — undertaken in universities and commercialized by companies like Symyx Technologies Inc. — led to new products. After about a decade or so of intense activity and excitement, the field seemed to fade away — or at least it remained under the radar for many synthetic chemists. To enthusiasts of the art and science of combinatorial chemistry, it wasn’t apparent whether this was the beginning of the end or the end of the beginning for this potentially disruptive synthetic chemistry game.

Out of the blue for many practicing synthetic chemists, like myself, artificial intelligence, machine learning, big data, supercomputers, computer simulations, and robotics appeared on our radar. At breakneck speed started to take off where combinatorial chemistry had left off, and the self-driving chemistry laboratory made its debut.

My “close encounters of another kind” with this community of creative thought leaders at the University of Toronto, especially my colleague Professor Alán-Aspuru Guzik, has recently opened my eyes to what the future may hold for chemistry. It’s not just a matter of doing combinatorial chemistry better, faster, and with greater reproducibility, I am beginning to realize that fast emerging robotic synthesis tools powered by artificial intelligence and learning machines are potentially capable of making traditional chemistry, as we know it today, kind of obsolete.

I never thought I would see the day when the vast literature on all synthetic methods that exist could be read and analyzed by a learning machine to find the best possible approach to a desired substance by screening millions to billions of possibilities at supercomputer speed. Based on this search stratagem, a synthesis could be “direct” to deliver a targeted property or “inverse”, akin to retro-synthesis in chemistry.

With this knowledge a robot is programmed to autonomously roam around a fully automated laboratory space to perform well-known chemistry manipulations and instrumental analyses to synthesize and determine the structure and property relations of a massive library of targeted compounds. I must confess that I was surprised, delighted, shocked, and enthralled to see the complete automation of synthetic chemistry’s favorite tools, such as the Schlenk and vacuum line, separation funnel, and crystallization, sublimation, distillation, rotary evaporation, and film deposition laboratory apparatus integrated in a self-driving chemical synthesis laboratory.

It now seems that the intricate chemical procedures I once thought too difficult in a self-driving laboratory are now possible with smart robot chemists thanks to the advent of high fidelity image and object acquisition and recognition, touch sensitivity, digital dexterity, and autonomous mobility. Now it seems possible that a typical doctoral research program undertaken by a chemistry graduate student could be completed within a day in a self-driving laboratory. This is a mind-boggling feat of human ingenuity that is here to stay, and can only grow in sophistication and power to do synthetic chemistry in a brand new way.

Once in the realm of I, Robot science fiction, it is possible to imagine a chemistry idea dreamed up in the morning, reduced to practice by lunchtime, the paper written in the afternoon and submitted in the evening to a robotic editor at a journal, peer reviewed by an expert robot, accepted or rejected and posted online before bedtime. An interesting question about this fanciful scenario is who actually dreamed up the idea? A human or a robot?

The possibilities for chemistry now seem boundless, only constrained by the imagination of humans and/or robots who are going to have to learn to live, work, and play together. The question of who in the team sets the task/target and who solves it is worth ruminating. On this note, recall the laws in I, Robot were: “A robot may not injure a human being or, through inaction, allow a human being to come to harm. A robot must obey the orders given it by human beings except where such orders would conflict with the First Law”. Let us not forget HAL in Kubrick’s A Space Odyssey, who was educated in the spirit of being perfect but made a mistake and so developed a psychosis. In addition, robots get sick.

A final thought: What about the future of opinion editorials of the type I have been writing for Advanced Science News for the past decade if a robot made all discoveries. Will human chemists in the future have the knowledge, experience, and understanding of chemistry that chemists have to write opinion editorials? They may lack the practice, thinking, developed imagination, and discipline of discovery! On the other hand, the thinking machines we have taught to “naturally” self-learn, grow, and evolve in ways that we hope will deepen our humanity and practice of civility rather than downsize or diminish or devour these phenomenal things. At the very least, these innovative AI & machine learning devices will surely augment their perspectives on the trajectory of human development.

“The robot will never have the ability to believe in something. So perhaps we will have at the end of this [digital] revolution a basis for a new human renaissance,” said Klaus Schwab, the founder of the World Economic Forum in Davos (quoted in TIME, January 25, 2016, p. 68). Dr. Schwab was commenting on the big picture of global business and life that took center stage at the annual meeting that year. In framing this picture of the digital revolution, Schwab noted, “We are at the tipping point of a whole variety of interconnected technological breakthroughs: robots, drones, intelligent cities, artificial intelligence, brain research. What differentiates the fourth industrial revolution is that it is not a product revolution. It is a system revolution. What we want to do in Davos is provide an overview of the implications of this revolution on governments, business and individuals. No one is thinking about the long-term consequences.”

Maybe the best creative, critical thinking role we can serve is helping the world community of business leaders and innovators make informed and wise decisions about the technology that we can build to advance human development, improve the human condition and the global environment. Now that information and inspiration service will always work for the common good and benefit of our collective future!

This article was amended on March 2, 2020, to correct the spelling of Professor Guzik’s name, who was incorrectly spelled “Guzic”.

The first COVID-19 vaccines are here, but challenges remain
A new type of bond: Charge-shift bonds
Direct air capture: A little history
A new tool for visualizing all atoms in a cathode lattice