Attraction and Repulsion: Cellular Micropatterns on a Graphene Film

Cells can be grown in micropatterns of poly-D-lysine on graphene, opening a door for cell bassed sensor applications. 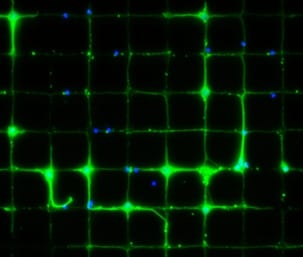 Cells can be grown on micropatterns of poly-D-lysine on graphene, opening a door for cell based sensor applications. 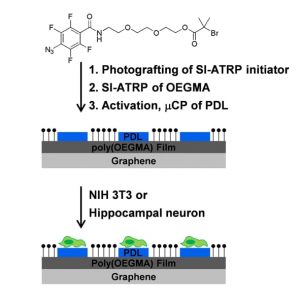 Graphene has recently attracted a great deal of attention in the scientific community, as evidenced by the Nobel Prize in Physics in 2010. The material is by definition a single-atom thick carbon sheet, which despite its lightness is exceptionally strong. Graphene is also nearly transparent and has excellent electrical conductivity, making it an attractive platform for analyzing cellular activity. However, techniques to chemically modify graphene are limited, which has made it difficult to implement graphene as a viable observational system.

In their communication in Macromolecular Bioscience I. S. Choi and coworkers report a method of functionalizing graphene using light-based reactions. Polymerization initiators were grafted onto graphene sheets using photochemistry, and the cell-repellant polymer poly(oligo(ethylene glycol) methacrylate) was subsequently grown on the graphene surface using

Using microcontact printing, the polymer-grafted graphene was spatio-selectively reacted with cell-attracting poly-D-lysine. This pattern of the surface polymers was then used to grow NIH 3T3

fibroblast or primary rat hippocampal neurons in a defined spatial arrangement. This method of functionalizing graphene could easily be combined with light-based patterning techniques to fully utilize the unique electrical properties of graphene in tissue engineering and cell-based sensor applications.