Researchers have now quantified the effect of pressure on the atom-transfer radical polymerization of methyl methacrylate. 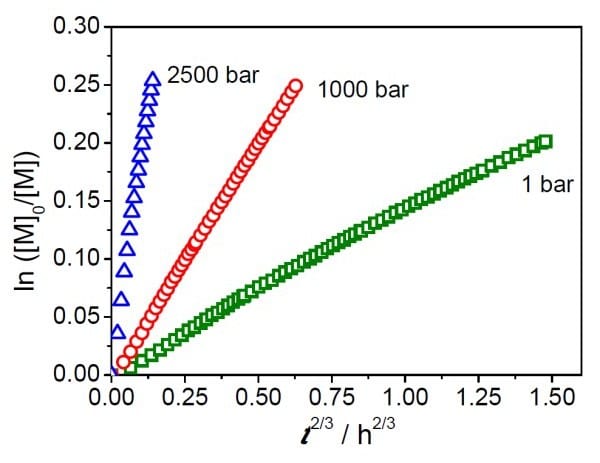 Polymerization rate and dispersity depend on the size of the associated activation–deactivation equilibrium constant, KATRP. The kinetics of Cu-catalyzed ATRP has been extensively studied for styrene polymerization, where ATRP rate has been found to increase significantly by applying high pressure. This beneficial effect is not compromised by an unfavorable effect on dispersity. The KATRP values measured on monomer-free model systems with an adequate initiator may be used for representing styrene ATRP.

J. Morick and M. Buback at Göttingen University together with K. Matyjaszewski at Carnegie Mellon University have now quantified the effect of pressure on KATRP and on the kinetics of ATRP of methyl methacrylate (MMA) by online VIS-NIR spectroscopy. The beneficial effects of high pressure on ATRP rate are also seen with MMA. On the other hand, model KATRP values measured for an initiator, which produces radicals of the same type as in MMA polymerization, allow for no adequate prediction of KATRP for MMA.

The analysis demonstrates that back-strain effects play a major role in the atom-transfer radical polymerization of methyl methacrylate.