Atomic force microscopy (AFM) traditionally requires a solid support for the sample under investigation. It uses a sharp tip attached to a cantilever to measure interaction forces between the tip and the sample. Based on laser-beam monitoring of the cantilever deflection during these interactions, it can generate detailed, 3D topographical maps showing a sample’s surface roughness down to the nanoscale.

A large proportion of the environments where natural processes occur are liquid/liquid interfaces, where AFM does not fare so well. Cells require ‘fixing’ to a solid substrate in order to image them with good resolution, but this contact technique deforms them (their apparent shape is altered) during imaging. An alternative method, scanning ion conductance microscopy, is non-contact and can provide information about living cell shape and migration without causing deformations; however, it is greatly limited compared to AFM in terms of the conditions under which it can operate and the types of information it can provide. 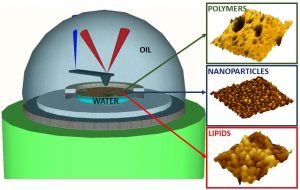 To address these limitations, a group working across France and the UK has figured out a way to image soft and dynamic liquid interfaces using AFM, without requiring any solid supports. They achieve this through the formation of stabilizing layers of either a block copolymer (polystyrene-block-poly(methyl-methacrylate)), lipids (1,2-dioleoyl-sn-glycero-3-phosphoethanolamine), or silica nanoparticle monolayers at the interface.

Oil/water interfaces were examined using the configuration shown in the image below. A flat interface (right) was confirmed to be beneficial to obtaining a sharper image.

The resolution was also found to be dependent on the thickness of the subphase, in this case, water. Gravity acts as a restoring force to external perturbations at liquid interfaces, causing noise in the images. The interfacial thin films employed by these researchers are able to support shear forces, reducing the mobility of the interface and making it easier to acquire a nanoscale-resolution AFM image. Using amplitude-modulation AFM, a subphase thickness of about 100 micrometers was determined to be a necessary maximum to ensure that any gravity wave excitation at the interface did not prevent reliable imaging at good scanning speeds.

This work demonstrates the applicability of the new technique to both hard (silica nanoparticle) and soft (self-assembling lipid) systems, offering the possibility to in-situ characterize inorganic and molecular systems directly at liquid/liquid interfaces.