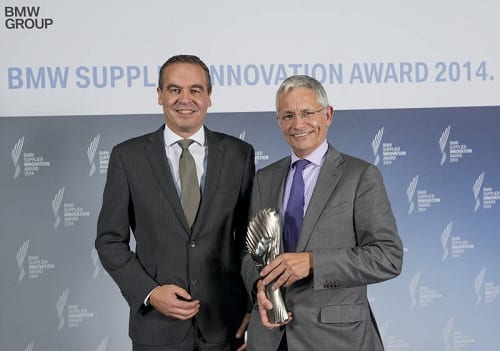 Recently, the BMW Group held its “BMW Supplier Innovations Award 2014” ceremony to celebrate the achievements and innovations of its suppliers. ASK Chemicals was awarded as one of the eight most innovative suppliers in the category sustainability. The prize was accepted by CEO Frank Coenen, ASK Chemicals, for the development of inorganic binders for high-volume series production in engine casting.

The industrial implementation of this innovation was a joint feat by BMW and ASK Chemicals, which set high benchmarks for emissions protection and economy. In addition, both partners were willing from the very beginning to systematically make the project a reality, despite the high demands of the production process.

“In the years of collaborative development between ASK Chemicals and BMW, the composition and manufacture of inorganic binders were perfected to such a degree that they were able to replace organic binder systems in high-volume series production. This has enabled the BMW Group to implement zero-emission foundries and to further improve working conditions for its employees. At the same time, productivity and the quality of the casting components have increased,” said BMW of its reasons for honoring ASK Chemicals.

Over the last few years the car manufacturer is improving vehicle production technologies to operate a zero-emission foundry. In 2010 the company’s Landshut plant in Germany was converted to produce 98 percent less emissions of combustion residues.

Working together, BMW and ASK Chemicals have developed and brought to market a key technology that is a major milestone for the automotive industry. Many renowned car manufacturers have followed this example and are today also intensively utilizing inorganic core production technology.

“The innovation award is an incentive for us to keep on researching and developing products, in order to bring these to industrial viability together with our partners. However, the idea and the innovative product are nothing without the resolute will of the user to successfully implement a new technology on an industrial scale,” commented Frank Coenen, CEO of ASK Chemicals, on accepting the award.