A new bottom-up network built from randomly distributed nanowires can learn, compute, and adapt like a human brain. 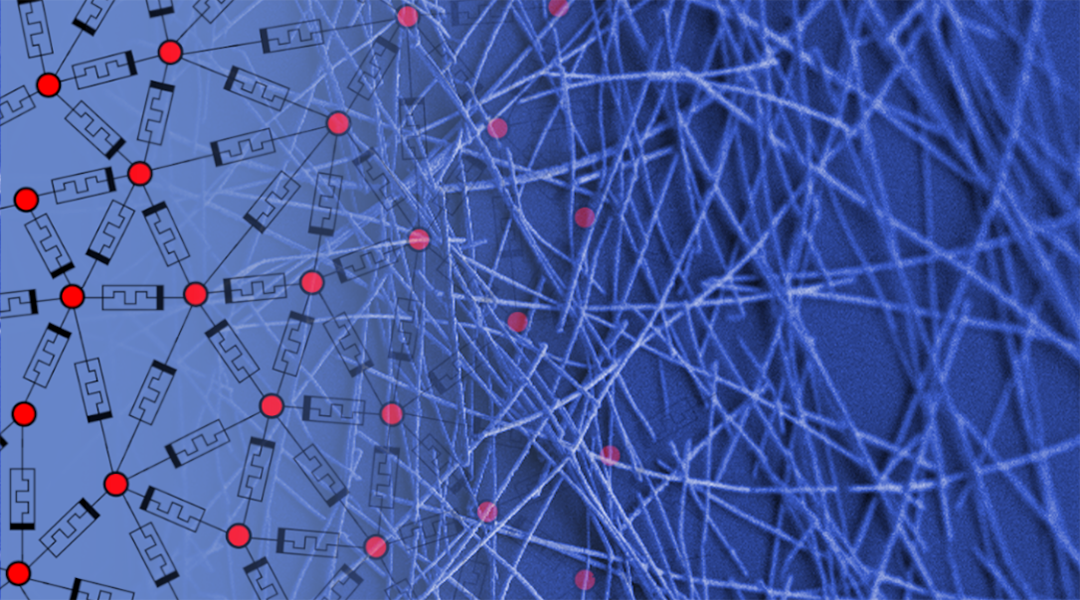 Functionalities of our brain such as memory and learning are enclosed in the emergent behavior of biological neural circuits composed of ~1014 synaptic connections in between neurons, where the high connectivity of the system provide robustness and adaptability. Emulating brain functionalities represents one of the main challenges of our society, being a milestone for the development of artificial intelligence (AI) and representing not only a logical endpoint for computational neuroscience, but also helping us to understanding how the brain works.

Recently, two-terminal nanoionic devices called “memristive devices” — where the internal state of resistance depends on the history of applied voltage and current — have been employed as building blocks for the realization of artificial neural networks with impressive and unprecedented performances in terms of speed, energy efficiency, and multibit programmability. Despite a bright future, it is hard for such rigid top-down architectures to emulate most typical features of biological neural networks, such as high connectivity, adaptability through reconnection and rewiring, and long-range spatio-temporal correlation. This limits their horizon of capabilities, functionalities, and applications.

In a recent study published in Advanced Intelligent Systems by members from our group, we propose an alternative nanoarchitecture based on bottom-up networks composed of randomly distributed silver nanowires. This system can learn and adapt when subjected to external stimuli, strictly mimicking the processes of experience-dependent synaptic plasticity that shape the connectivity and functionalities of the nervous system.

Different from top down crossbar arrays, nanowire random networks show high connectivity (~106 nanowire junctions/mm2) and have the huge advantage of being prepared without the need for expensive clean room facilities required for conventional lithographic processes to minimize contamination from dust and other small particles.

Much like the brain, the network connectivity can be controlled by means of different forms of plasticity phenomena, in which synaptic connections strengthen or weaken over time. These include the manipulation of the connection strength at the cross-point junction in between intersecting nanowires (weight plasticity) and the control of rupture/rewiring of nanowires (wiring plasticity). This adaptive mechanism of rupturing and recreating new synapses is absent in crossbar arrays, while reconnection/rewiring in biological neuron networks is thought to be essential for higher brain functions like learning and memory.

The functional connectivity of our system endows it with the so-called “heterosynaptic plasticity effect,” which is the ability of a synapse to change its strength as a result of the activity of other synaptic pathways. In biological systems, this form of plasticity plays an important role in contributing to the stability and homeostasis of neural networks.

This flexibility combined with the low cost and scalability of our bottom-up approach make memristive nanowire networks a breakthrough, enabling technology for neuromorphic computing. It represents a radical new approach for the development of biologically inspired intelligent systems that are able to physically compute data from multiple inputs, paving the way for the implementation of unconventional computing paradigms.