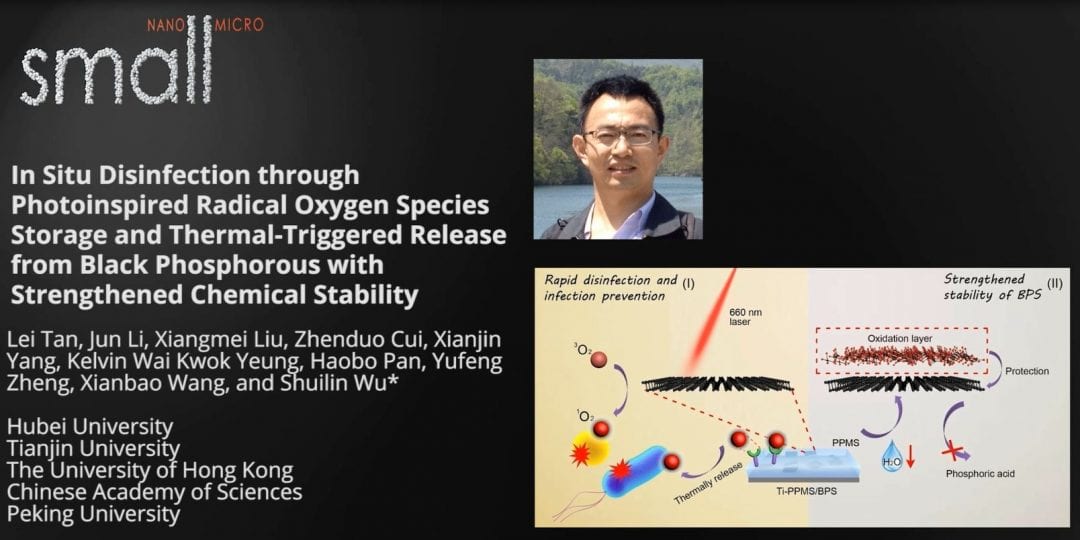 Antibiotics are central to fighting bacterial infections, but new measures against multi-drug-resistant bacteria are needed. Fortunately, light is a readily available means to generate antibacterial singlet oxygen. However, the reactive oxygen species has to be stored to achieve long-term disinfection.

In a communication in Small, Shuilin Wu from Hubei University and Tianjin University, and co-workers report an approach for long-term, in-situ disinfection and infection prevention that uses black phosphorous nanosheets (BPS) as photosensitizers for singlet oxygen production. Integration with (4-pyridonemethylstyrene) endoperoxide (PPMS) introduces a mechanism that stores reactive oxygen species for time-dependent release in the absence of light.

Sedimentation experiments and structural characterization confirm the superior long-term stability of PPMS/BPS compared to BPS alone. The oxidation layer of the BPS and PPMS prevents further degradation of the underlying BP.

The mechanism of singlet oxygen storage and release by reversible endoperoxide formation is confirmed by NMR. Absorption of the probe 1,3-diphenylisobenzofuran (DPBF) decreases over time in the presence of singlet oxygen. This effect is much faster with light irradiation in an oxygen-rich environment, continues in the dark after initial irradiation, and is dramatically enhanced at high temperatures. Multiple light–dark cycles cause a continuous absorption decrease of the probe in the presence, but not in the absence, of PPMS-BPS, illustrating the reversible nature of singlet oxygen storage and release. This is confirmed by contact angle experiments that detect the polarity change induced by reversible endoperoxide (EPO) formation.

Titanium-PPMS-EPO/BPS treated with S. aureus are tested in vivo, confirming the superiority of both the irradiated PPMS/BPS and PPMS-EPO/BPS over other systems. Histological staining reveals reduced inflammation in the presence of singlet oxygen. No signals of abnormalities or lesions of organ were observed, further demonstrating the excellent in-vivo biocompatibility of this antibacterial film.

To find out more about this promising approach for broadband antibacterial treatment of surfaces, please visit the Small homepage.