A new way to stop pimples in their tracks. 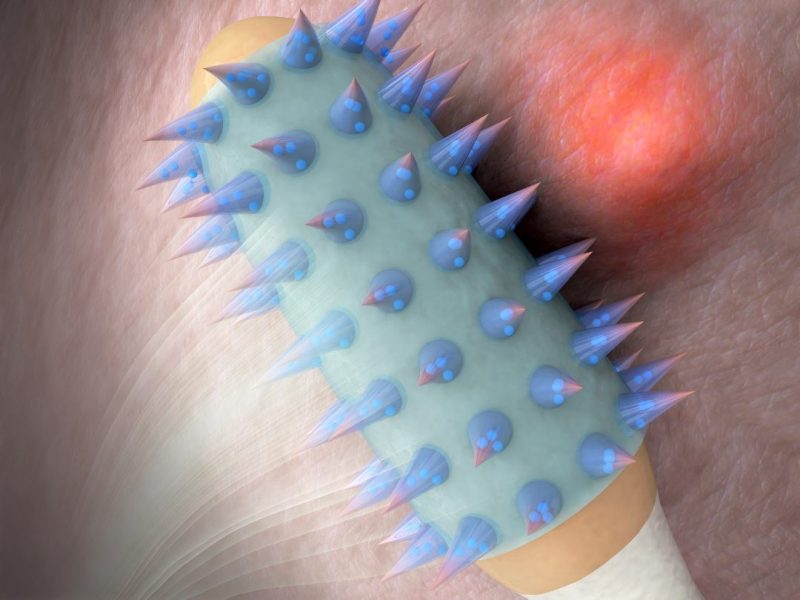 In the US, acne results in 5 million trips to the doctor every year. It is one of the most common medical conditions in that country, with 95% of teenage boys and 85% of teenage girls affected.  While it has at times been characterized as a natural part of the life cycle, in its most severe forms it can have serious effects, such as stress and low self-esteem.

There are a range of treatment options available for sufferers. These treatments focus on killing the bacteria P. acnes, a crucial part of the disease cycle. Topical ointments are available, however poor skin penetration limits their usefulness. Oral antibiotics are also sometimes prescribed, but long term use of these can have a negative effect on gut-flora. An international team has recently sought to improve on the available treatments through an interesting approach. 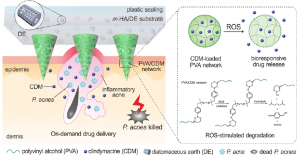 Schematic of the mode of action.

As any sufferer would tell you, acne tends to be accompanied by inflammation of the skin. The researchers took advantage of this side effect, designing a drug delivery system that is activated by chemicals present in inflamed skin. This ensures that the drug is targeted only to areas where P. acnes is present. The drug and its delivery system were loaded into microneedles on a patch (see below). These microneedles were able to deliver the drug under the skin without causing breakages.

The efficacy of the patches was trialed in a series of experiments on mice. Five days after treatment, acne related swelling had decreased in size by 90%. It was found that mice treated with the microneedles had significantly fewer inflamed cells after 6 days than those who were treated with a common anti-acne cream. No noticeable side effects in the surrounding skin were observed.

Given these promising results, the authors suggest that this patch/microneedle apparatus might be used in the future for treating other common skin diseases.

Photos of the microneedle patch laid out flat, and rolled onto a cotton tip.