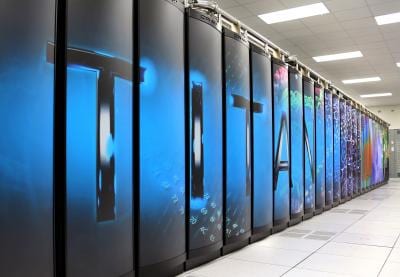 Scientists at the U.S. Department of Energy’s Ames Laboratory, Bruce Harmon, Kai-Ming Ho, and Cai-Zhuang Wang, have been awarded 45 million processor-hours of computer time on Titan, the world’s premier open science supercomputer according to the November 2012 TOP500 list of the world’s fastest computers.

Titan, located at the DOE’s Oak Ridge National Laboratory in Oak Ridge, Tenn., uses a combination of traditional central processing units (CPUs) and a family of processors called graphic processing units (GPUs) that were first created for computer gaming and have a unique capacity to perform the same operation simultaneously on multiple pieces of data. With a theoretical peak of 27 petaflops or 27,000 trillion calculations per second, Titan is 10 times more powerful than its predecessor, Jaguar, but uses only 19.4 percent more power.

“For thousands of years, humans have discovered useful alloys through hit-or-miss metallurgy,” said Harmon. “Now, we finally have the computing capability to explore greater complexities using quantum mechanics– greater numbers of atoms, the possible crystal structures, and their properties. We can determine which will be optimal, hand it to experimentalists, and say ‘this alloy composition may have a ‘sweet spot’ with ideal properties.’ In turn, experimentalists can return to us and say, ‘this did not work, but maybe the addition of this other element can help.'”

In this way, Harmon said, theorists and experimentalists will be able to work closely together to speed the discovery process for alternatives to rare earth alloys.

“To get the new materials we are looking for with the right magnetic properties, we are most likely looking at ternary structures with a larger number of atoms. This is a much more complex problem, and very difficult to explore,” said Wang. “The increased computer capabilities paired with an efficient algorithm will open up new areas for us to search for new alloys.”

The computer time was granted through the DOE’s Innovative and Novel Computational Impact on Theory and Experiment (INCITE) program, which promotes scientific discoveries and technological innovations by awarding time on supercomputers annually on a competitive basis. A total of 61 projects, including the Ames Laboratory’s, were granted computer time for 2013.

The computational search for the crystal structures and new materials for permanent magnet applications is supported by the Beyond Rare Earth Materials project, led by the Ames Laboratory and funded by the DOE’s Energy Efficiency and Renewable Energy (EERE) Office, Vehicle Technology Program. The basic science, algorithms, and computational code development for the structure prediction and phase diagram exploration is supported by the Exploratory Development of Theoretical Methods project funded by Materials Science and Engineering Division of Basic Energy Sciences, U.S. Department of Energy Office of Science through the Ames Laboratory.