Tiny swimmers shaped like different letters in the alphabet help researchers understand motion on the microscale for future microrobot applications. 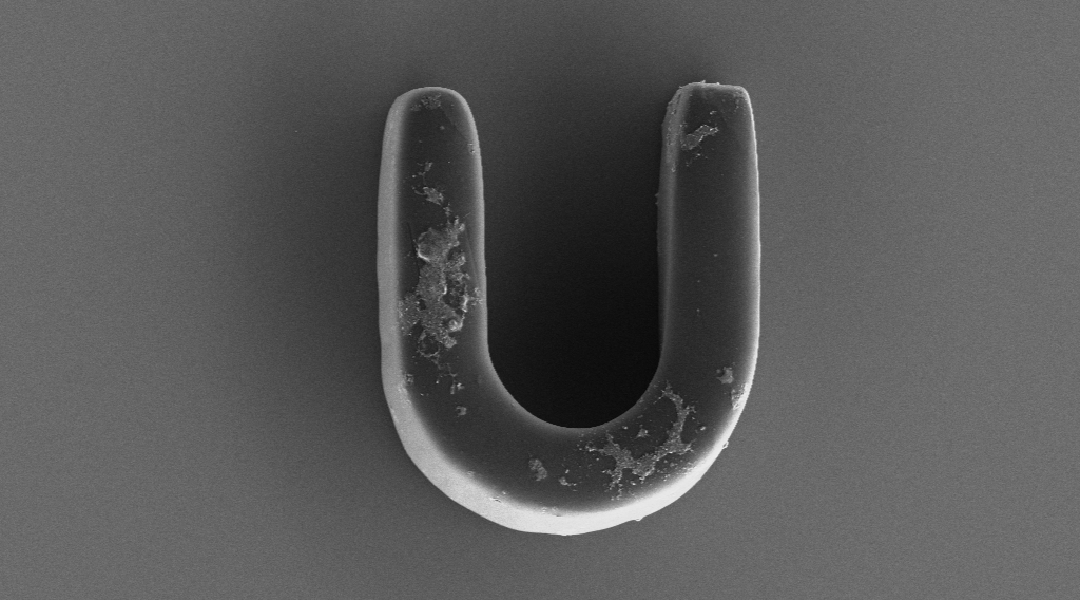 We learn pretty early in life that shapes can be diverse; we associate certain shapes to objects and embrace that beyond just recognition, they have crucial importance.

In nature, information is encoded in shape, which is often correlated with function. The Nobel prize winning chemist Ada Yonath frequently employs a simple illustration to visualize this concept: having the right shape, the paper clip is fully functional, once it gets deformed, it becomes a useless piece of wire.

In an interdisciplinary study by two teams of chemists from Dresden and Prague in collaboration with mathematicians from Birmingham, the influence of shape on the motion of active micro-swimmers capable of propelling themselves was investigated.

Over the last decade, making microscale devices move has become quite an active field of research. This is actually a tricky area because the physics behind microscale swimming is dominated by very different laws compared to the macroscale.

When swimming in the pool, we push water away and, beyond simply displacing it, create turbulences, which nudge us forward or backward, even after we have stopped the motion.

On the microscale, such turbulences do not form, but we can imagine the water to consist of layers that can only be displaced in an orderly, parallel manner. Therefore, no gliding occurs and an individual that wants to swim on the microscale needs to be constantly displacing the liquid. Though there have been advancements in this area and there are now different strategies to drive motion on the microscale, controlling the path and direction of these tiny swimmers is not yet reliable.

On a large scale, it is well known that for example in planes, shape influences drag and optimization can lead to drastic reduction of fuel consumption. But on the microscale, less details about these correlations are known.

To this end, microscale swimmers shaped like different letters in the alphabet and propelled by an enzymatic chemical reaction were created. A catalase enzyme, which degrades peroxide molecules, leading to oxygen bubble formation, was incorporated at both ends of the microswimmer structure constructed from a hydrogel. When the chemical reaction occurs, these bubbles shoot out of the swimmer, resulting in a system that resembles a micro-rocket.

The hydrogel itself was chosen as it is is an excellent host for biological enzymes (because the hydrated polymer chains stabilize them), and they have the added of advantage of being easily molded into different morphologies using only light.

Using shadow masks, specific areas of the gel were shielded to control the shape and size of the resulting microswimmers. Swimmers in the shape of an I, U, and S were produced and their motion observed in a peroxide fuel solution to determine how these shapes would influence propulsion.

The “I” microswimmer typically resulted in pumping motion that did not move the fluid symmetrically around the swimmer or result in motion.

Slightly more complicated, the “U” microswimmer produced oxygen bubbles at both ends, which point towards the same direction. This resulted in successful propulsion, meaning the micromotors could swim up to several hundreds of µm/s, which account for up to 15 body lengths/s.

The letter S, which in math would be called a second shape mode, can be considered a long filament bent twice. Since bubbles still emerge from the ends but on opposite sides, the bubbles typically cause the S to turn or rotate, which would be handy in a situation when the swimmer was required to alter its direction.

The aim of understanding the motion modes of these swimmers is to allow the field to reach a point where soft microrobots can easily navigate their environments, and if need be, switch between different modes by changing their shape on demand.  For example, at a microscale crossroads, when the light is green, the micromotor body bends into a U shape and moves forward, while a red traffic light converts the micromotor into an I shape, where is effectively only pumps fluid and hovers in place.

Similar to the paper clip, or the proteins from Yonath’s studies, when shape will control function, interesting applications will naturally follow.