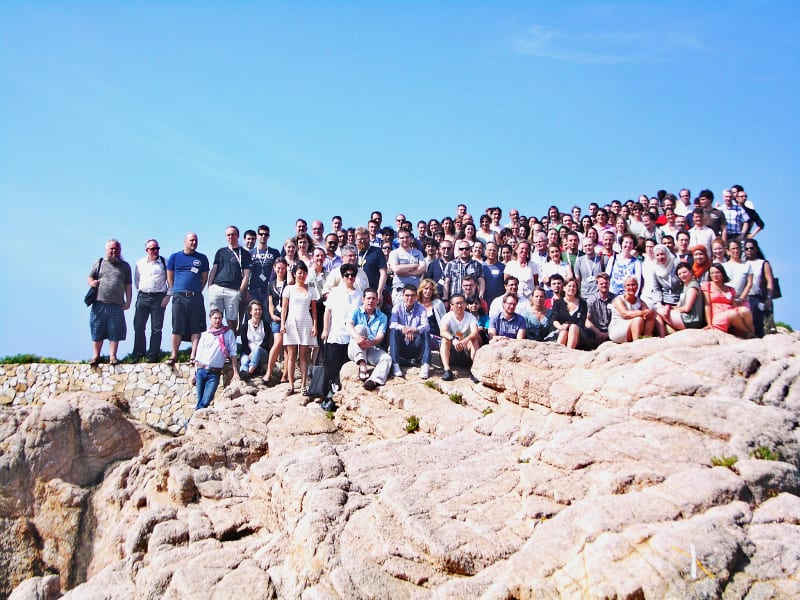 Amidst efforts to engineer biomaterials and understand complex biological systems, physical and life sciences are converging on the issue of biointerfaces. Researchers of diverse backgrounds and nationalities gathered at Sant Feliu de Guixols, Spain for the FEBS-ESF Workshop on Biological Surfaces and Interfaces to discuss progress toward understanding and harnessing biosurfaces. This report samples the topics and themes that were discussed during the course of the meeting and contains an endorsement of such small interdisciplinary workshops from the perspective of two participants and winners of Poster Prizes sponsored by Advanced Healthcare Materials. 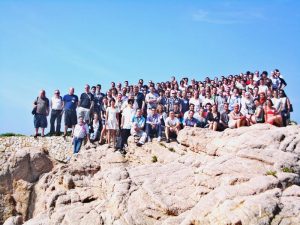 The FEBS-ESF Workshop on Biological Surfaces and Interfaces was held on June 30th-July 5th 2013 in Sant Feliu de Guixols, Spain. It was attended by close to a hundred and fifty researchers in the field of biointerfaces and was chaired by Ralf Richter of CIC biomaGUNE, ES and Catherine Picart of Grenoble INP, FR. Biological interfaces mediate interactions at the meso- and macro-scale, yet they are assembled by nanostructures with intrinsic and emergent chemical and biological activity at the nanoscale (i.e. lipids, proteins, carbohydrates, etc.). Accordingly, the meeting gathered researchers investigating across these size scales.

At the molecular scale, the topics covered included lipid membrane physics, membrane associated proteins, and technologies related to their study. Jesus Perez-Gil from Universidad Complutense de Madrid (ES) presented his work on pulmonary surfactant-associated protein. He introduced captive bubble surfactometry and laid forth a body of evidence testifying that “SP-B is the most important protein for pulmonary surfactant activity.” Bruno Antonny of CNRS and Université de Nice Sophia Antipolis (FR) gave a talk on membrane curvature-sensing proteins: the amphipathic lipid-packing sensor (ALPS) motif as well as alpha-synuclein which plays a central role in Parkinson’s disease. Professor Antonny’s work strikes an impressive balance between deep biophysics and practical insight for medicine.

Fredrik Höök from Chalmers University of Technology (Gothenburg, SE) spoke about current and future public health issues including the vaccine scare and gene therapy and emphasized scientists’ responsibility to uphold rigorous standards when dealing with public health. He discussed artificial cell membrane mimics and corresponding analytical techniques while highlighting his groups’ recent progress toward developing “membrane chromatography” or the separation of proteins in supported lipid bilayers. At one point, professor Höök referred to ligand multivalency, a theme that arose several times during the meeting in posters and presentations. Mirjam Leunissen from FOM Institute AMOLF (NL) presented a review of entropic phenomena related to surface-tethered binding groups and their association across adjacent surfaces, comprising an examination of multivalency and its nonlinear enhancement of macroscopic binding stability.

In the introductory keynote lecture, Alain Brisson, UMR-CBMN CNRS-Universite Bordeaux 1 (FR) retraced his 25 year long effort that combined analytical chemistry and electron microscopy to elucidate the role of annexin A5, a protein responsible for rapid membrane repair which elegantly self assembles to stabilize ruptured lipid bilayers. He exemplified the need to exert constant, painstaking and sustained effort towards advancing knowledge. We were personally struck by the elegance of this single protein and its emergent dynamics, and our thoughts echoed the words of Ralf Richter, chair of the conference and Prof. Brisson’s former student, who said he had “gained an appreciation for the sophistication of proteins” under the professor’s influence.

At the meso- to macro-scale the topics emphasized were biomaterials, tissue engineering, mechanotransduction and its role in determining cell phenotype. Janos Vörös from ETH (Zurich, CH) introduced the audience to the effects of interface voltages and currents on cell behavior. He described how “electrical fences” that prevent cell adhesion could determine the spreading and architecture of a cell culture. Jason Burdick from UPenn (Philadelphia, USA) reported on how the chemical and physical properties of hydrogels can be designed and optimized for drug delivery or for directing the fate of stem cells, while Andres Garcia from Georgia Tech (Atlanta, USA) described how the incorporation of bioactive signals into synthetic hydrogels can stimulate angiogensis and subsequently improve pancreatic islet transplantation. Fiona Watt from Kings College (London, UK) gave the EMBO prize lecture on how substrate design can determine cell fate, elucidating the role of stiffness, material composition and surface chemistry on the differentiation of stem cells.

In the second keynote lecture, Dennis Discher from UPenn (Philadelphia, USA) presented the active role of the CD47 membrane protein in self-recognition, and indicated how materials design can benefit from CD47 derived peptides to improve biocompatibility through self-recognition. Using a proteomics approach, he showed how the nucleoskeletal protein lamin-A’s abundance correlates with tissue elasticity. Prof. Discher underlined the value of information rich analysis and data mining during the Forward Look Plenary Discussion noting that “this is the information age” and that coming efforts to elucidate the connected roles of biological modules will require the use of large databases and a new generation of programming-literate scientists able to tap their potential.

The unifying theme of intermolecular interactions and their role on the behavior of interfacial systems was addressed in the closing keynote lecture by Jacob Israelachvili from UCSB (Santa Barbara, USA) who gave a colorful account of the history and present status of surface science, including DLVO theory, his development of the surface force apparatus, and recent research on the mechanisms of gecko and mussel adhesion. Professor Israelachvili called for a transition from describing phenomena to identifying principles. This talk was tempered with a humorous though cautionary reference to “belly flops” in surface science such as Jacques Benveniste’s water memory debacle – an embarrassment resulting from overlooking adsorption of molecules to surfaces and more generally from insufficient rigor in the metrics used to characterize the system. To further stress the importance of surfaces in biological systems, we were reminded that nothing in the cytosol is more than 10 nm from a surface despite the spacious mental picture of the cytosol that many of us have.

The two poster sessions featured over 100 innovative research subjects, in their early-to-mid stage of development. Confidentiality prevents us from discussing poster highlights, but it was clear that a great degree of technological innovation and scientific understanding will coalesce in the coming years around the theme of biological interfaces. The sessions were highly attended, with great interest on the part of senior researchers, which provided invaluable feedback for the younger scientists. The meeting was styled informally, with significant opportunities for networking, where students and young scientists were constantly interacting with senior researchers in casual contexts at meals and during coffee breaks. An excursion to the local Salvador Dali museum, close proximity between hotel rooms and lecture hall, and outdoor lunches amidst a beautiful Mediterranean backdrop gave attendees a chance to not only discuss science but to make lasting friendships and connections that would be difficult to achieve at larger, more structured meetings.

Growing nerve cells: The longer the cell, the better the model
An antidiabetic drug in the fight against antibiotic resistance
CRISPR-HOT: A new tool to visualize cells
Hydrogels with biomimetic intelligence