A soft robotic platform capable of carrying 7.7x its own mass while moving using four-legged locomotion. 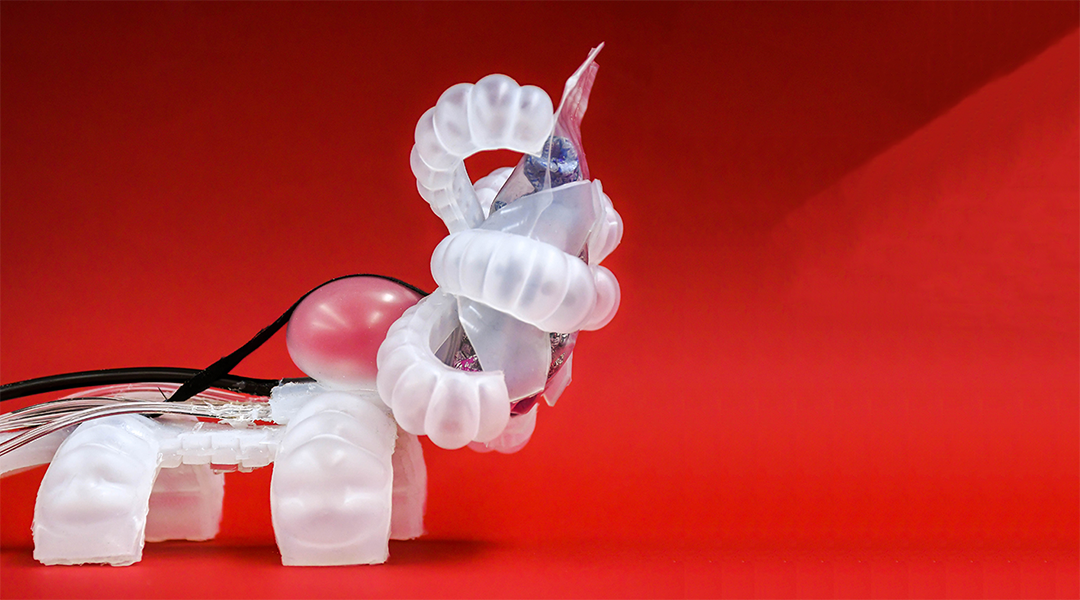 Soft robots offer fascinating opportunities for development in areas where their rigid counterparts are limited. Their softness—often combined with high resilience and mechanical resistance—endows them with enhanced flexibility and adaptability to external unstructured surroundings, making their interaction with humans and delicate objects comparably safer.

Although providing significant advantages, the soft nature of these robots can pose some limitations when performing specific tasks such as lifting and carrying object during locomotion. Currently, combining locomotion, manipulation, and load-carrying capabilities entails a unique set of challenges that are still to be fully explored.

Until now, researchers have tried to overcome these issues by developing platforms where soft components are integrated into rigid systems, e.g., soft grippers on industrial manipulators to facilitate the grasping of delicate objects. By exploiting the properties of the constituent materials, complex systems with advanced capabilities such as locomotion, grasping, and manipulation have been reported. Soft robots with adaptable locomotion have also been demonstrated, although they tend to lose their capabilities when carrying a payload.

In their latest article published in Advanced Intelligent Systems, Prof. Tommaso Ranzani and his group at Boston University have demonstrated a soft robotic platform able to grasp objects while moving using legged locomotion. Notably, the load bearing capacity of the robot was improved by embedding rigid components as “floating bones” into the legs of the robot.

When a payload is loaded, the bones contact each other, creating a more stable structure via a passive stiffening mechanism. Thanks to this design, the robot was able to sustain a load equal to 7.7 times its body weight, and it was able to walk while carrying a payload up to 100% its own weight. Importantly, the motion was not affected when no payload was added. The robot also displayed the ability to pick up objects and carry them while walking by retroflecting its gripper to maintain its center of mass, a mechanism reminiscent of ants carrying leaves with their jaws.

“We hope that this research will represent a step forward to bring soft robots into real-world applications, indeed their inherent safety and robustness make them promising candidates to be safe and useful companions to our everyday activities,” says Ranzani. “However, there are still multiple technical challenges to be addressed before that could be entirely possible, such as improving the autonomy of the platform through on-board control and providing the robot with the capability to sense the environment.”

The road towards the effective implementation of soft robots in real-world applications is open. Owing to their safety and robustness, they could soon become an essential component of our day-to-day activities.

According to Joanna Thelen, co-author of the published article: “The impact of this research is that it establishes a precedent. It shows that a single soft robot can successfully execute both locomotion and gripping motions, and can do so with significantly heavy carrying loads compared to its own body weight. For us, the next steps would be improving the performance standard in the robot’s movement, and setting it free from the tubes used to actuate it.”