A switch to turn off genes: RNA interference

Understanding the mechanisms by which genes can be "turned off" could be a powerful means of pest control. 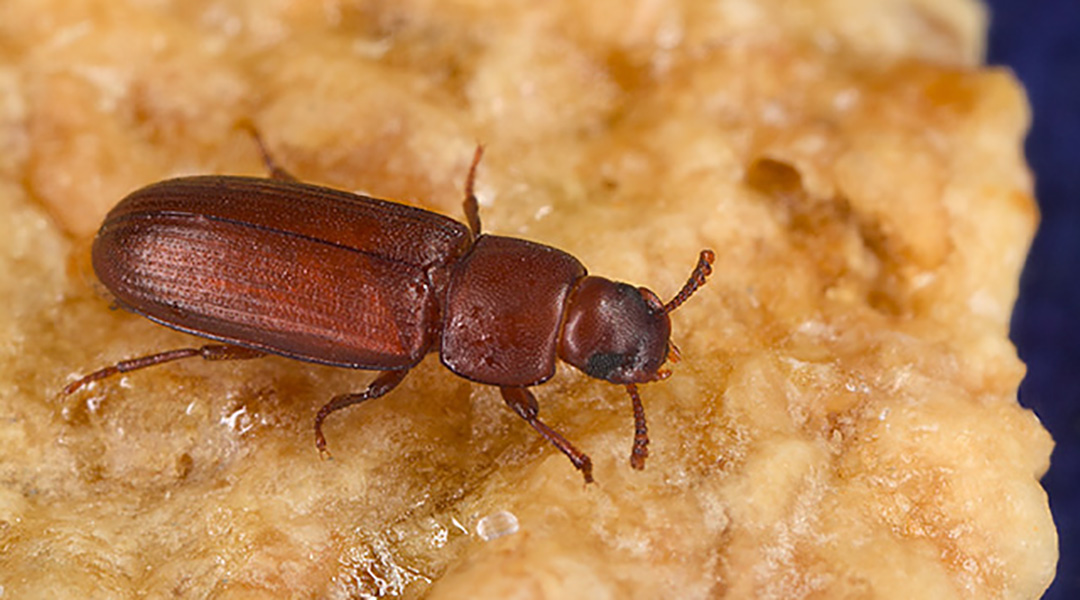 A new study has helped unravel the mechanisms by which “gene-silencing”, or the turning off of the function of a particular gene, occurs in the red flour beetle — a pest affecting food grains all over the world. The technique, termed RNA interference or RNAi, has potential applications in fields as diverse as pest control and disease management.

Before we get into the findings of the paper, however, here’s a quick primer: Attend any introductory genetics class and you’re likely to learn about the Central Dogma, which explains the flow of genetic information in a cell.

The professor might put it very simply and say, “DNA makes RNA, and RNA makes protein”. DNA, most of which is present within the nucleus of the cell, contains genes, which hold instructions for the creation of the proteins responsible for literally every function of our bodies.

Thanks to the activity of enzymes —biological catalysts that accelerate chemical reactions in our body — messenger RNA (or mRNA) is created from genes. This mRNA is then transported into another part of the cell where it is “translated” into protein.

But sometimes, either in the form of a naturally occurring response to a foreign agent, such as a virus, or as a response to a gene-silencing mechanism in a laboratory, the mRNA molecule giving rise to a particular protein can be destroyed, causing a loss in function of the gene that produced it. This is RNA interference or RNAi.

Interestingly, it is a different variant of RNA, called double-stranded or dsRNA, that is responsible for the destruction of the mRNA during RNA interference. In short, dsRNA is broken down by a protein called Dicer into small interfering RNA (siRNA), which eventually interfere with the expression of specific genes by attaching to the mRNA and destroying them.

A type of RNAi called parental RNAi was studied in the paper recently published in the journal Advanced Genetics. Parental RNAi is a technique in which the gene-silencing treatment is administered to the parent organism and the effects of the “gene knockdown” are seen in its progeny.

While the basic RNAi mechanism, including how Dicer cuts dsRNA into small interfering RNA, was already known, how parental RNAi occurs exactly and for how long the gene silencing occurs in the progeny had not yet been addressed.

A new method to measure RNAi in a cell

In order to distinguish between mRNA originally present in the cell and dsRNA, the authors developed a novel strategy called RT-qPCR — a technique used to quantify RNA within a cell. In previous studies, fluorescence microscopy was used to detect and quantify dsRNA. In this technique, the RNA to be quantified would first be tagged using a protein which lights up when excited by a particular wavelength of light and is then detected using a fluorescence microscope. But this approach had very limited sensitivity and could only track early embryos up to the four-cell stage.

“This new nested/semi-nested RT-qPCR approach can be applied to RNA extracted from any developmental stage throughout the formation of the embryo, or from any particular cell population or tissue type, allowing a novel way of tracking long dsRNA transmission,” said Kristen Panfilio, one of the authors of the paper and researcher at the University of Cologne and University of Warwick at the time of this research, in an email. Panfilio is now a professor of molecular genetics at the University of Hohenheim.

The team found that not only is dsRNA directly transmitted into the egg of the female beetle, but that the RNAi gene silencing, or “knockdown” effect, persists for months before waning at rates specific to the strain of the beetle. In essence, a single injection of a dsRNA into the female beetle can cause highly efficient and persistent RNA interference.

By targeting genes that are important for the growth or survival of pests, RNA interference can be used to selectively affect or kill specific pest species.

“RNAi is a very appealing strategy for species-specific methods of pest management, such as for insects that are agricultural pests.  Knowing that RNAi knockdown can in fact last for months, but that its persistence can also be strain-specific in a given species, can help researchers identify key parameters for developing new RNAi strategies for pest control,” said Panfilio.

Your brain: Built by cilia
Circadian rhythm in cognitive and physical health
Can the pneumonia vaccine protect against COVID-19?
ROS and the Making of the Modern Cell