A swarm of flying 3D printers inspired by bees

Modeled after nature's builders, a swarm of 3D printing drones work together to build large structures while in flight. 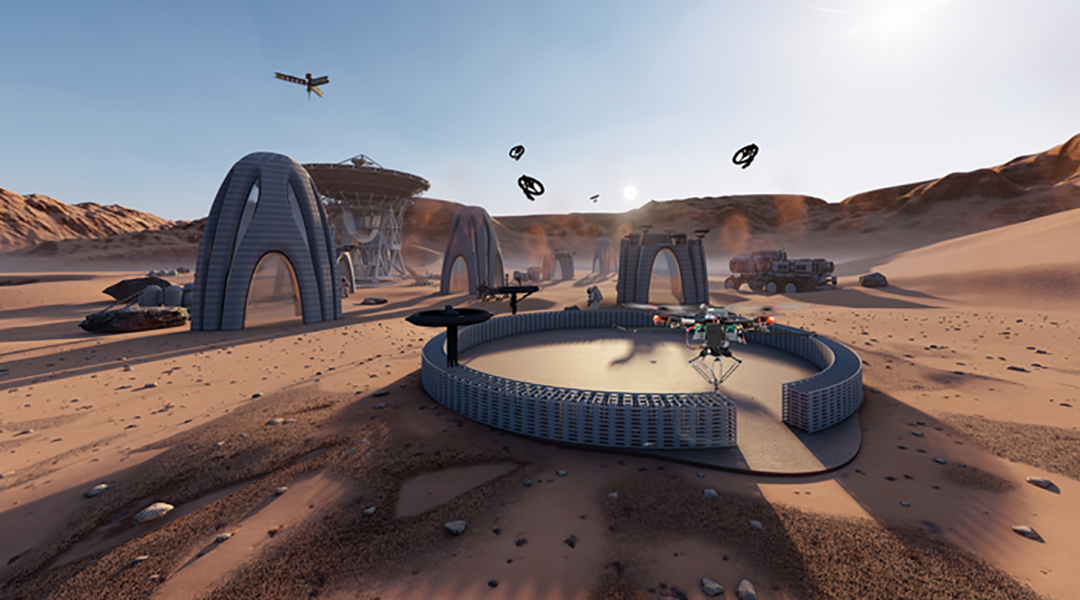 A multidisciplinary consortium spanning various universities has developed a process known as “aerial additive manufacturing” to 3D print structures in real time using drones. Not only were these drones able to build structures while in-flight but they could also monitor and adjust their building capabilities on the fly.

Presently, 3D-printed construction, or additive manufacturing, can take one of two paths: In one process, parts of the final structure are assembled off-site and then put together, akin to Lego, or else ground-based 3D printers build structures, and are better suited in uncertain environments where adaptable construction is needed.

But existing, ground-based 3D printers are limited in the size of structures that can be printed. “This is limited by the size of the printer,” said Mirko Kovac, a researcher at Imperial College London in the UK. “If you have mobile multi-agent systems, they are basically scalable, so they can print fully in 3D, and build larger structures with very small systems.” A large structure could potentially be built with multiple printing agents that are brought to the site of construction.

A swarm of 3D printers

In developing their concept of aerial 3D printing, Kovac and colleagues looked to natural builders, such as wasps and bees, for inspiration. Bees routinely build structures much larger than themselves with the help of others in their hive.

To test their theory, the team developed two types of drones for the task: The BuilDrone, which can autonomously extrude and lay down various building materials in-flight. And just as bees or wasps may scan their environment as they build a home, a second robot called a ScanDrone sweeps over the structure as its built, providing input on how to proceed. “The trajectory of the 3D printer — the flying printer robot — is adjusted based on the scan,” added Kovac.

Both types of drones are capable of working in three dimensions, either simultaneously or sequentially, and using a special building arm, they were able to put down building materials with manufacturing accuracy of a few millimeters.

For their experiments, the researchers used two different materials — a foam and a cementitious material. These materials needed be lightweight for easy transportation by the drone and had to be easily extrudable (or printable) but also strong enough to be laid down on top of each other to form layers.

As a proof-of-concept, the drones were first used to craft a 2.05-metre-high cylinder with a 0.3 meter diameter made of 72 layers of the foam material. Next, the drones built another, smaller cylinder that was 0.18 meters high and made up of 28 layers of the cement-like material. To see if their manufacturing method could be scaled up, the researchers carried out a simulation experiment to virtually print larger structures using 15 drones.

Both the construction material and the battery-operated drone were charged manually but in future, these steps could be automated, according to Kovac.

Their mobility and adaptability make the aerial additive process especially useful. For instance, drones could be used to repair cracks in the facade to prevent heat losses or fissures in gas or water pipelines. The ability to repair-in-flight would also eliminate the need for scaffolding.

Besides helping with design elements, the aerial additive manufacturing could eventually sync up with ground-based 3D printers as well as humans to help build full-scale structures.