A step towards QD solar cells

MIT researchers find that the secret lies in off-kilter ratios of the two basic components that make up the dots. 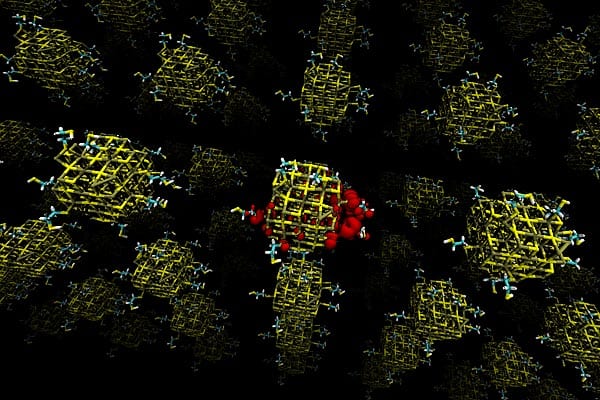 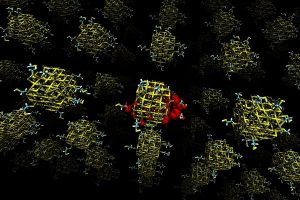 This illustration shows a lead sulfide quantum dot array. Each quantum dot (the colored clusters) is ‘passivated’ by molecules that bind to its surface. Dots that are made up of unequal amounts of lead and sulfur tend to cause electrons (shown in red) to become highly localized, which can substantially lower the electrical transport of the device. Image: Donghun Kim and Jeffrey C. Grossman.

There has been great interest in recent years in using tiny particles called quantum dots to produce low-cost, easily manufactured, stable photovoltaic cells. But, so far, the creation of such cells has been limited by the fact that in practice, quantum dots are not as good at conducting an electric charge as they are in theory.

Something in the physical structure of these cells seems to trap their electric-charge carriers (known as electrons and holes), but researchers have been hard-pressed to figure out exactly what. Now, for the most widely used type of quantum dots, made of compounds called metal chalcogenides, researchers from MIT may have found the key: The limiting factor seems to be off-kilter ratios of the two basic components that make up the dots.

In bulk quantities of lead sulfide, the material used for the quantum dots in this study, the ratio (known by chemists as “stoichiometry”) of lead atoms to sulfur atoms is exactly 1-to-1. But in the minuscule quantities of the material used to make quantum dots — which, in this case, were about 5 nanometers, or billionths of a meter, across — this ratio can vary significantly, a factor that had not previously been studied in detail. And, the researchers found, it turns out that this ratio is the key to determining the electrical properties of the material.

When the stoichiometry is a perfect 1-to-1, the quantum dots work best, providing the exact semiconductor behavior that theory predicts. But if the ratio is off in either direction — a bit more lead or a bit more sulfur — the behavior changes dramatically, impeding the solar cell’s ability to conduct charges.

Grossman explains that every atom inside the material has neighboring atoms on all sides, so all of that atom’s potential bonds are used, but some surface atoms don’t have neighbors, so their bonds can react with other atoms in the environment. These missing bonds, sometimes called “dangling bonds,” have been thought to play a critical role in a quantum dot’s electronic properties.

As a result, the consensus in the field has been that the best devices will have what is known as full “passivation”: the addition of extra molecules that bind to any loose atomic bonds on the material’s surface. The idea was that adding more of the passivating material (called ligands) would always improve performance, but that didn’t work as scientists had expected: Sometimes it improved performance, but sometimes it made it worse.

“That was the traditional view that people believed,” says Kim, who was the paper’s lead author. But now it turns out that “how many dangling bonds the quantum dot has is not always important, as it doesn’t really affect the density of trap states — at least in lead-and-sulfur-based dots.” So, if a given dot already has an exact 1-to-1 ratio, adding ligands makes it worse, Kim says.

The new research solves the mystery of why that is: Computer simulations reveal that there is an optimum amount of passivating material, an amount that neutralizes exactly enough of these loose bonds to counterbalance any discrepancy in the stoichiometry, restoring an effective 1-to-1 balance. Too much or too little passivating material, and the imbalance remains, or even increases, reducing the efficiency of the material.

There has been “a lot of excitement” about the potential for quantum dots in applications including electronic devices, lighting and solar cells, Grossman says. Among other potential advantages, quantum-dot solar cells could be made in a low-temperature process, by depositing material from a solution at room temperature, rather than the high-temperature, energy-intensive processes used for conventional photovoltaics. In addition, such devices could be precisely “tuned,” to obtain maximum conversion of specific wavelengths (colors) of light to energy, by adjusting the size and shape of the particles.

To go beyond the efficiencies achieved so far with quantum-dot solar cells, Grossman says, researchers needed to understand why the charges got trapped in the material. “We found something quite different than what people thought was causing the problem,” he says.

“We hope this will inspire experimenters to look at this in new ways,” he adds.

Figuring out how to apply this knowledge, and how to produce quantum dots with well-controlled elemental ratios, will be “challenging,” Grossman says, “but there are a number of ways of controlling the surface.”

The discovery came as a pleasant surprise, Kim says, noting that the researchers unexpectedly observed the origin of trap states as they were studying the way surface treatments would affect the material. But now that they have found this key factor, he says, they know what their goal is in further research: “The electrons will be happy when the distribution … is just right,” he says.

Giulia Galli, a professor of physics and chemistry at the University of California at Davis who was not connected with this research, says it is “quite a creative and important piece of work,” and adds that, “I’m pretty sure this will stimulate new experiments” to engineer the stoichiometry of quantum dots in order to control their properties.