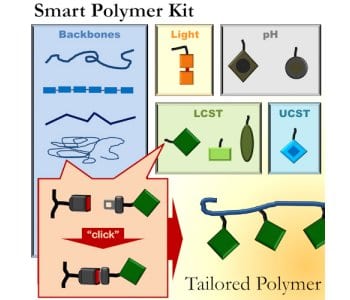 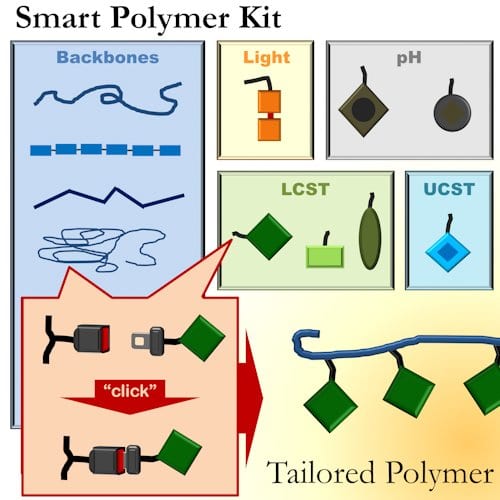 Synthetic polymeric materials play an enormously important role in virtually all fields of modern technology. Current research is focused on stimulus-responsive, so-called “smart” polymeric materials, which drastically change their properties in response to specific stimulation, for example changes in temperature, pH value, or light. A material’s response typically consists in changes in polarity and solubility. As a consequence, large pieces of material may reversibly change in shape and surfaces with reversibly switchable wettability and nano-carriers enabling a triggered release of their payload can be designed.

Whether or not a polymer is responsive toward a specific chemical or physical stimulus depends on its chemical composition and the presence of certain chemical functional groups. Recent advances in synthetic techniques have allowed a great deal of freedom in incorporating many such functional groups into well-designed polymers and in constructing tailored smart materials. An advantageous method in this regard is postpolymerization modification. In this method a chemically reactive polymeric precursor is first prepared, which, in a second – postpolymerization – step, is then equipped with functional groups that endow the resulting material with specific properties. This technique lends itself perfectly to the incorporation of several functional groups into one material and the study of structure-property relationships for functional groups.

In his recently published Talent Article, Peter J. Roth (University of New South Wales, Sydney) shows that the molecular basis for certain types of smart behavior can be explained with a focus on somewhat more complex temperature-responsive systems. Using a variety of literature examples, guidelines for an appropriate choice of functional groups in postpolymerization modification reactions toward composing novel smart materials with tailored properties are given.