Researchers describe a novel “body-on-a-chip” device that consists of 14 interconnected compartments, each representing a different organ of the human body. 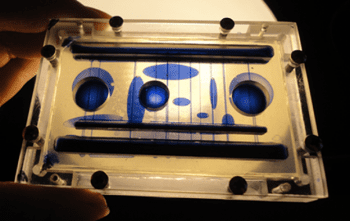 Finding an alternative to animal drug testing has been the primary focus of an ongoing effort in biomedical community. In addition to bioethical considerations, the differences in anatomy, physiology and biochemistry between animal and human subjects puts an additional level of inaccuracy on the results. In some cases they led to failed clinical trials. Lab-on-a-chip technology provides an opportunity to emulate drug distribution, metabolism and action in the body by using human cells in physiologically relevant conditions.

In their Biotechnology and Bioengineering paper Paula Miller and Michael Shuler at the Cornell University Department of Biomedical Engineering,  describe a novel human “body-on-a-chip” device that consists of 14 interconnected compartments, each representing a different organ of a human body such as liver, lung, skin, gastrointestinal tract and others.

To ensure the functionality and accuracy of their 14-chamber microphysiological device, the authors built a pumpless system that circulates fluid bidirectionally by using a custom programmed rocker platform. After building and calibrating the device components, the last step was to test the viability of cells in a new “body-on-a-chip” device. The authors tested their device with a liver cell line HepG2 C3A in all 14 chambers for 48 h. They were also able to sustain viability and functionality of five different cells lines seeded in five different chambers for a week. The new system provides a physical framework to imitate the actual interactions between organs and tissues of human body in response to drug or chemical treatment.