An inventive new approach lowers the limit of detection for a common assay, allowing researchers to identify elusive biomarkers in complex fluids, like the blood. 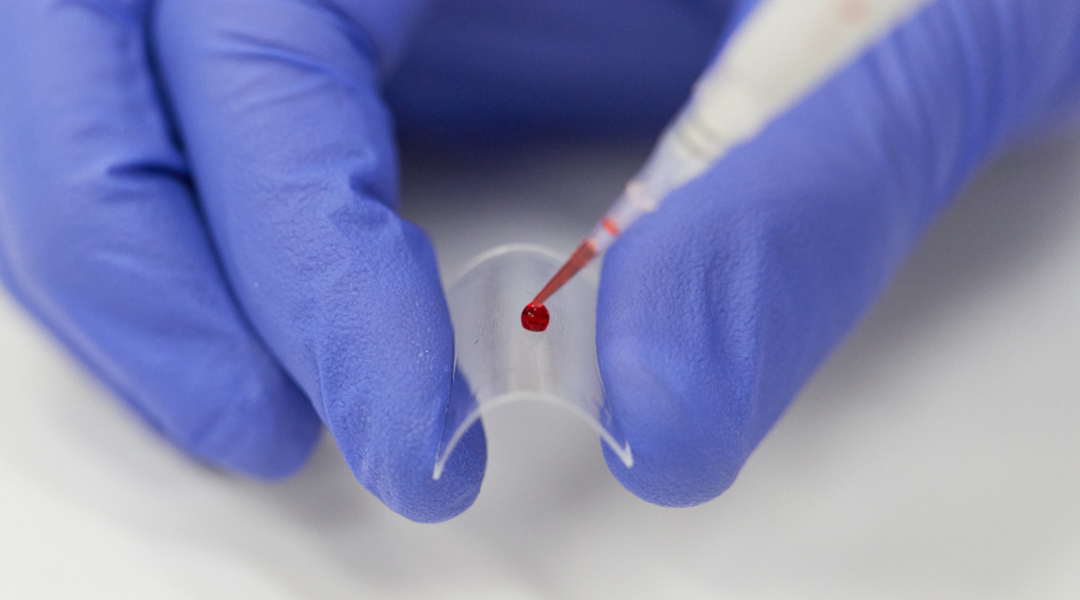 Biomarkers that help health care workers predict the severity of a COVID-19 infection before symptoms become unmanageable could help save countless lives and possibly ease the burden on healthcare systems.

One such biomarker is called human interleukin‐6 (IL‐6). It’s an inflammatory cytokine, which is a type of signalling molecule secreted by immune cells, and is part of a broader family of molecules that helps the immune system respond to different diseases and infections.

“IL6 is a marker for a wide range of diseases such as different cancers and also viral infections,” said Professor Tohid Didar of McMaster University in an email to ASN. “Monitoring IL-6 concentration and detecting abnormal, elevated levels could lead to early detection.”

In fact, previous studies have linked IL-6’s concentration in the blood with severity of disease, where significantly elevated levels indicate aggressive tumor growth or high viral loads, and, ultimately, a poor prognosis for the patient.

As a result, there has been increasing interest, especially given the severity of the current pandemic, to use IL-6 as an early-stage biomarker for infections. “With COVID-19, measuring IL-6 levels could help monitor the progression of the disease and [allow healthcare professionals] to take preventative measures in time to reach at the best treatment strategies,” added Didar.

While promising, one problem with detecting IL-6 arises from the fact that it is present in low concentrations within a very complex mixture: the blood. This makes it extremely difficult to accurately detect, but is exactly what Didar and his team of researchers set out to solve.

Existing technologies are limited when it comes to reading IL-6 levels in human plasma. They work quite well in buffer solutions, but their performance declines significantly in real samples, leading to more false positive results and higher limits of detection.

To overcome this, the team, in collaboration with SQI Diagnostics, developed a modified immunoflurescence assay that incorporates what are called “lubricant-infused surfaces” to eliminate binding of unwanted targets.

“The sensor is a simple sandwich immunofluirecence assay,” said Didar. “This assay is typically done in the a variety of clinical labs to detect different markers. What makes our sensor unique is the surface engineering aspect.”

These lubricated surfaces are popular as “anti‐biofouling” coatings, meaning they repel bacteria, blood cells, proteins, and other fluids that could contaminate and interfere with IL-6 testing. The team rationalized that though these surfaces have not yet been used as blocking agents for biosensing applications, their ability to repel so many unwanted contaminants might offer a way to lower their device’s detection limit in complex fluids.

“In complex fluids (e.g., blood or plasma) there are a lot of non-specific interactions with the sensor that affects its sensitivity,” added Didar. “Our smart biointerface eliminates the non-specific interactions and therefore increases the sensitivity resulting in limits of detection below 1 pico gram per mL.” The device can read IL-6 at levels of one trillionth of a gram per milliliter, which is drastically better than the most recent reported limit of these devices in plasma, which was 23 pg/mL.

To detect IL-6, the team attached tiny recognition elements called capture antibodies onto the surface through a technique called noncontact printing, which the authors say leads to a higher yield of antibodies patterned onto the surface and therefore, a lower limit of detection.

“I would compare it to a shallow sea with tiny plants sticking out of the water, like islands. The sea is the lubricant we engineer on the surface and the plants are the IL-6 capture molecules. This not only prevents other molecules reaching the surface, but enhances the interaction of the target molecule (IL-6 in this case) with the surface,” said Didar.

The ease of design, high sensitivity, and ability to detect specific markers in complex fluids make this platform robust, simple, and cost‐effective.

“This new approach is not limited to only IL6 detection and can actually be used for detecting other sensitive markers and can be designed to detect multiple targets at the same time,” added Didar. “We are working closely with our industry partners to bring this to the market soon, we are hoping to integrate this interface to existing diagnostics platforms to expedite its commercialization.”

Online learning in a pandemic: A perspective
Renewable energy from wildflowers for a more sustainable bioeconomy
Gautam Dey: From open-ended searches emerge our most transformative discoveries
Low- and middle-income countries overlooked in COVID-19 response to date