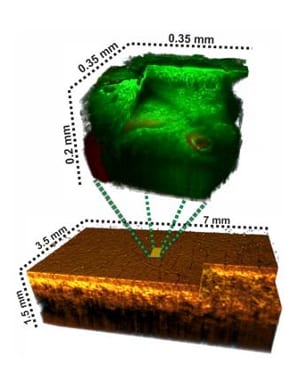 The development of optical non-invasive in vivo 3D imaging techniques suitable for clinical dermatological applications has been an area of intense research since the 1990’s. Now, two methods as a “twin pack” might pave the way to significant improvements in the field of dermatology by exploiting the benefits of each modality: Multiphoton tomography (MPT) and optical coherence tomography (OCT), which are both imaging modalities capable of performing in vivo “optical biopsy” and have been successfully used for clinical as well as research applications in dermatology.

MPT is based on non-linear processes such as two photon excited fluorescence (TPEF) from endogenous fluorophores and second harmonic generation (SHG) from non-centrosymmetric molecules. OCT is an imaging technique capable of reconstructing 3D internal structure of a target tissue by measuring the amplitude and time delay of backscattered light. As these two techniques are complimentary in terms of imaging performance such as resolution, penetration depth and contrast, a combination of MPT and OCT could be fruitful as a diagnostic tool. 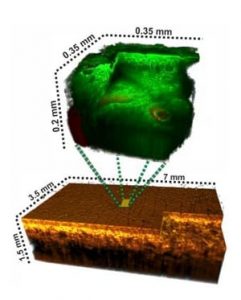 Wolfgang Drexler and his colleagues from Medical University Vienna, Austria, and JenLab GmbH, Jena, Germany investigated the diagnostic potential of a multimodal MPT/OCT approach in various dermatological applications. In a preliminary clinical trial, they sequentially used state-of-the-art MPT and OCT systems to acquire 3D images of normal skin, nevi, scars and pathologic skin lesions in vivo. OCT was used for visualizing and pre-screening micron-scale morphology of a relatively large tissue volume. MPT was subsequently employed to reveal sub-cellular details of a zoomed-in tissue volume. The aim of this study was to visualize the 3D morphology of different skin layers and to identify characteristic features of various skin pathologies.

MPT proved to be capable of revealing sub-cellular details of different skin layers up to a depth of 200 mm, without need for any extrinsic contrast agents. Meanwhile, OCT could be used to reveal the layered architectural arrangement of skin tissue over a volume of about 10 X 10 X 1.5 mm3. The study demonstrated the clinical diagnostic potential of MPT/OCT for pre-screening relatively large areas of skin using 3D OCT to identify suspicious regions at microscopic level and subsequently using high resolution MPT to obtain zoomed in, sub-cellular level information of the respective regions. With the help of metabolic information extracted using MPT, it should even be possible to perform non-invasive in vivo functional imaging of the target tissue.