A Bioplastic Made From Fish Waste

A Sussex student invented a bioplastic sourced from the sea. 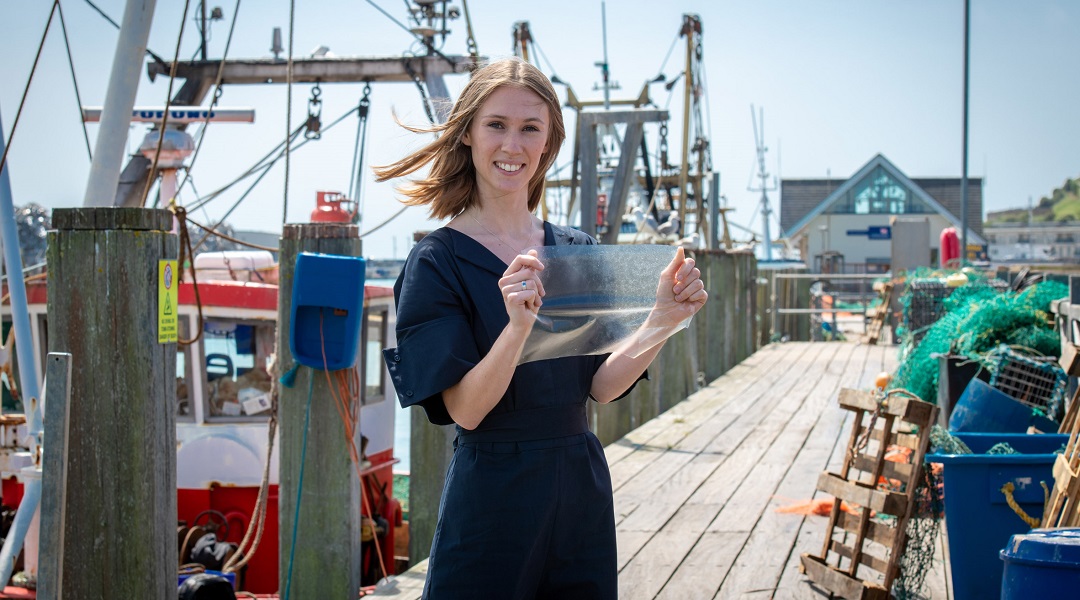 Although fish leather is part of an ancient tradition, especially in East Asia, it has only recently been rediscovered. The advantage of this material is that its mechanical properties are almost identical to those of conventional leather, but the production process can make use of waste from the food industry.

Lucy Hughes, a student at the University of Sussex has recognized fish waste as a sustainable material source, and has invented a process for turning it into an alternative source of plastic, hoping to solve the problem of both single-use plastics and waste streams.

Through a university tutor, she got in contact with a fish processing plant and wholesaler in Newhaven. A tour of the plant identified various waste streams to work with including: offal, blood, crustacean and shellfish exoskeletons as well as fish skins and scales. In the UK alone, more than 170,000 tonnes of fish waste is produced annually from land based processing and 50 million tonnes worldwide each year. The organic fish waste is normally headed for the landfill or incineration. First investigations show that the fish skins and scales had the most potential locked up in them, due to their flexibility and strength enabling protein.

The 24-year-old student found locally sourced red algae to bind the proteins extracted from the fish waste—the strong, overlapping bonds impart strength and flexibility. Unlike land-based binders, red algae does not need any fresh water, fertile land or fertilizers to grow. This versatile plant can grow all over the world and is naturally carbon positive. It took over 100 different experiments to refine the composition and process to form the bioplastic. The result is a translucent and flexible sheet material she called MarinaTex, an ideal single-use packaging, which requires relatively few resources, little energy, and temperatures under 100 degrees to produce.

According to Hughes, one Atlantic cod could generate as much organic waste as required for making 1,400 bags. However, she solely uses unwanted off-cuts from the fishing industry for her bioplastic. But admittedly, MarinaTex is not really a plastic or a polymer. It is a new material that behaves differently to plastic in production and manufacturing but has a similar functionality and appearance to plastics. The final material is both translucent and fully biodegrades after four to six weeks.

And MarinaTex does not smell, as Hughes has stronly emphasized. It is odorless. Initial testing with prototype material has shown the bioplastic to be as strong as LDPE at a similar thickness. This will be investigated in more detail in the next phase of development.