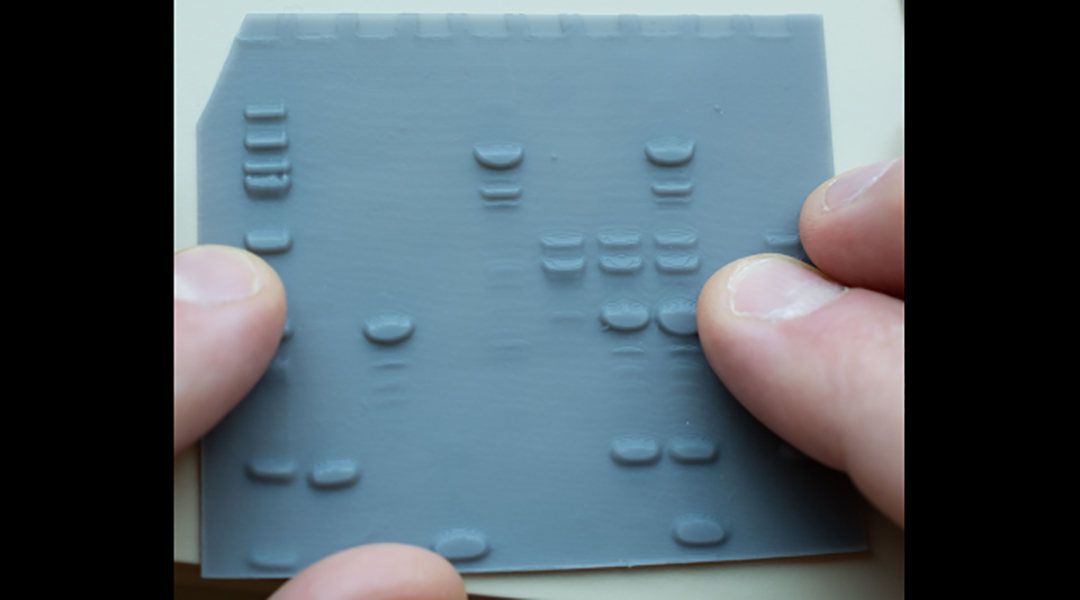 Using 3D printing and an old-fashioned art form, a team of researchers is making science accessible to people who are visually impaired.

“I was introduced to this type of work through personal experience,” explained Bryan Shaw, one of the study’s authors and professor in the Department of Chemistry and Biochemistry at Baylor University in Texas. “My son was born with bilateral retinoblastoma [cancerous tumors in both eyes] and is somewhat visually impaired. As he grew older, he became interested in science and so a lot of my work has been to try and help create better tools, environments, and ways of thinking so that kids like him can be part of science.”

In the last few years, we have seen a greater shift in attitude around inclusivity and diversity within the scientific community. But Shaw and his collaborators say that these initiatives overlook the needs of people who are blind or have poor vision, and who have been historically discouraged from entering the sciences.

“There is a huge activation barrier or effort barrier preventing blind people from getting into science because we’re told this is a visual subject, there’s no way you can do this,” explained Matthew Guberman-Pfeffer, a National Institute of Health postdoctoral fellow at Yale University and another of the study’s authors who has been blind since birth.

“But how molecules are drawn on the board have nothing to do with reality,” he continued. “They are a human convention for representing a reality to which everyone is blind. There is no reason as to why we can’t come up with other ways of communicating. That motivated me through the years to find alternative ways to see what is beyond anyone’s sight.”

Guberman-Pfeffer says he was put in touch with Shaw through a mutual friend — Hoby Wedler, a chemist and another of the study’s authors — and was blown away by what he saw.

Shaw had turned to 3D printing to convert experimental images into lithophanes — a type of art popular in Europe in the 1800s and possibly first developed in ancient China in which images are etched or molded onto thin materials, such as wax or porcelain, and are visible when backlit with a light source.

“By printing typically 2D scientific data as a lithophane, we created a data format that could be universally visualized by people regardless of their level of eyesight,” said Chad Dashnaw, a doctoral researcher in Shaw’s group. “To exclude a group of people based on this impairment hurts the community because we are losing brilliant minds, which could one day make some groundbreaking discoveries.”

To create the lithophanes, the team used a small, commercial 3D printer that cost less than $5000 USD to print extremely thin and highly detailed 3D versions of experimental images using a gray photopolymer resin. Each lithophane contains a raised image whose patterns perfectly match the digital image from which it was created, down to the finest details, say the team.

“We make thin, tactile graphics that blind people can feel and that sighted people can hold up to light to visualize,” said Shaw. “We don’t necessarily 3D print braille, as only about 10% of blind persons read braille and it takes up tons of space.”

Guberman-Pfeffer recalled the figures from an organic chemistry textbook, which had been translated into braille. “All this money and time was spent on creating these braille chemistry books, but when I went to look at a diagram of cyclohexane chair conformations, I couldn’t read them at all,” he said. “The diagram was so difficult to interpret that I couldn’t get anything out of it. This strategy with lithophanes may get around this problem.”

“With this [3D printing] technology, I could in principle have a 3D printer, download an article, and if the software was in place, I could 3D print the figures. I could get instant access to the data in the literature to communicate and discuss content with colleagues on an equal footing because we could be looking at it at the same time. This has the potential to democratize access to data in a universal way.”

“The fact that the lithophanes literally allow me, as a blind chemist, to share data and visual information of any kind with my sighted peers is truly game changing,” added Wedler. “This technology is opening doors to careers people never thought possible.”

Interpreting the data through tactile senses

In the study, the team printed five lithophanes based on experimental data, which included SDS-PAGE (gel electrophoresis used to separate proteins with molecular masses), scanning electron micrographs, and mass spectra, as well as the secondary structure of a protein.

They tested the ability to interpret the data through touch in a cohort of both blind and sighted individuals and found a high degree of accuracy.

“This work helps to provide a quick and easy way to share data between blind and sighted people that is visually appealing to the sighted while also displaying the same information in tactile format,” said Jordan Koone, another of Shaw’s doctoral students at Baylor University and co-author of the study. “The possibilities with the lithophane format are limitless. You can print any imagery whether it be in STEM or the arts and humanities that a blind person can interpret just as well as a sighted person.”

While this is a significant achievement, the technology needs to be further developed to make the process easy-to-use and accessible outside of the lab. The team say next steps will be to collaborate with computer scientists to write the code required for automation such that anyone reading a paper can click a button and print the lithophane version of any figure or graph.

In the meantime, it’s encouraging to see such passion for advancements in accessibility within the sciences. “These lithophanes do a stunning job of making science and data more shareable among sighted and blind people,” said Guberman-Pfeffer. “But they do more than just that, they are literally giving sight to people who didn’t have it before in terms of their ability to ‘see’ scientific data.”

“Just wait and see what we come up with in the future,” added Wedler. “The best is yet to come!”

Access to forbidden rings with autocatalysis
Sheets of carbon nanotubes come in a rainbow of colors
Citizen science: The future of research could be in the hands of many
Anti-aging drug could help turn back the clock