The 32nd edition of the International Conference on Digital Printing Technologies (NIP) was held in Manchester, UK, this month. 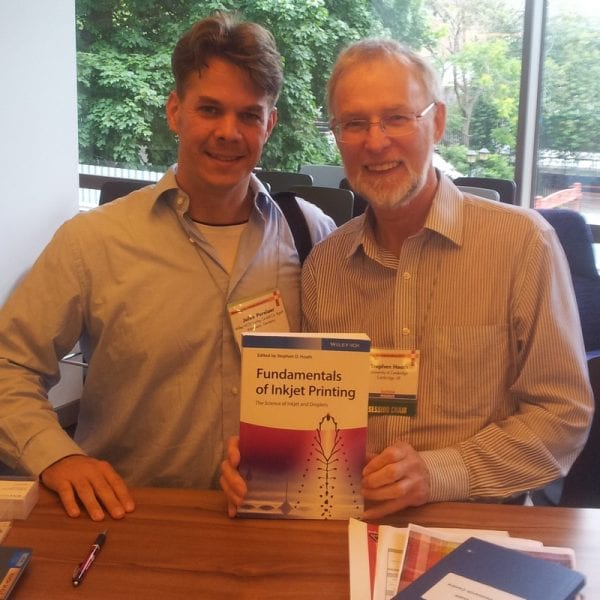 The 32nd edition of the International Conference on Digital Printing Technologies (NIP) was held in Manchester, United Kingdom, from September 12 – 16. This year’s edition was special for two reasons. First of all, it was the first time since its start in 1981 that the conference was held again in Europe. Secondly, the conference name has recently changed from ‘Digital Fabrication’ to ‘Printing for Fabrication’.

As an industrial city, Manchester represented a perfect venue for this year’s conference. Manchester has a rich history in innovation, as much of this originated with the processing of raw cotton and the production of cotton goods during the industrial revolution. Moreover, Manchester opened the world’s first Intercity train connection between Manchester and Liverpool in 1830.

Manchester can also claim 25 Nobel Prize laureates, including Ernest Rutherford (1908, discovery of sub-atom particles and the chemistry of radioactive substances), Niels Bohr (1922, understanding the atomic structure), James Chadwick (1932, discovery of the neutron), and more recently André Geim and Konstantin (Kostya) Novoselov for their work on graphene in 2010. 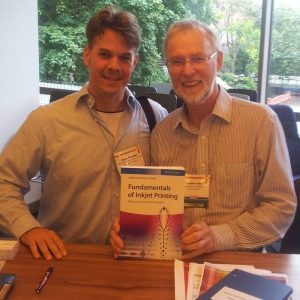 Organised by the Society for Imaging Science and Technology (IS&T), the conference hosted 130 presentations, 5 key-note presentations, 16 short-courses and 26 poster presentations. The attendance has been steady over the last years with approximately 300 participants from all over the world. The conference was held in conjunction with the 2016 International Symposium on Technologies in Digital Photo Fulfilment, which gave more networking possibilities for the participants.

On Monday Sir Kostya Novoselov gave an excellent opening keynote on two-dimensional materials. Starting with his groundbreaking experiments on graphene, he gave new insights in many other 2D atomic crystals, e.g. NbSe2, TaS2, WSe2. The resulting pool of 2D-materials is huge, and they cover a massive range of properties: from conductive to insulating as well as from strong to soft. By stacking such materials the resulting 2D-based heterostructures can be tailored with atomic precision and individual layers of very different character can be combined. This opens a wide range of new applications with the functionality embedded in the materials’ design.

In three parallel sessions, topics such as printed electronics, 3D printing, biofabrication and materials for printing were discussed in detail by researchers from academia and industry from all over the world. Prof. Kye-Si Kwon (Soonchunhyang University, South Korea) presented the real-time monitoring of first-droplet failure in inkjet printing systems, which is important for the reliability of high-speed industrial printers. Dr. Patrick J. Smith presented his recent results on reactive inkjet printing for tissue engineering.

On Wednesday, Prof. Henning Sirringhaus gave an excellent keynote lecture on carbon-based optoelectric materials, with a strong focus on transistors for printed electronics. In his presentation he showed examples of organic materials that have their mobility exceeding that of amorphous silicon. Moreover, plastic electronics have emerged in the last 10-15 years and show already commercially available applications, such as solar cells by the company Eight19 and transistors by PlasticLogic.

On Thursday the awards ceremony took place. Sponsored by Hewlett-Packard Company, the Gutenberg Award was given for an outstanding contribution to printing technology. This year’s award went to Dr. Werner Zapka (XaarJet AB, Sweden) ‘for leadership in the printing community and leadership in surface manufacturing.’

On Monday evening the welcoming reception took place in the Manchester Town Hall, which is regarded as one of the finest examples of Neo-Gothic architecture in the United Kingdom. On Thursday the conference reception took place in the Museum of Science and Industry, which is partially housed in a former British rail station. At this location the get-together not only provided an excellent opportunity for networking, but also offered insights in the rich industrial history of Manchester.

In conclusion, the recent name change to ‘Printing for Fabrication’ has been good for the conference as it continues to be successful and forms an excellent networking opportunity for anyone involved and/or interested in new applications and materials for printing, that go beyond traditional printing.