Xiaodong Chen and Yi Cui will receive the 2015 Small Young Innovator Awards in Bejing on the 3rd of September 2015.

Professor Xiaodong Chen and Professor Yi Cui have won the “2015 Small Young Innovator Awards. The awards will be presented in the coming “Small Science Symposium”, to be held in Beijing on the 3rd September, 2015.

“For important contributions in the area of soft matter nanotechnology” 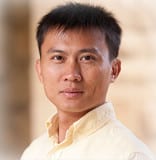 Associate Professor at the Department of Materials Science and Engineering, Stanford University, USA

The award will consist of a certificate and CNY ￥6,000.

The 2015 award is jointly supported by National Centre for Nanoscience and Technology, China and Wiley.