MaterialsViews recently spoke to East China Normal University Professor Yiyun Cheng about his biomedical research - here's what he had to say. 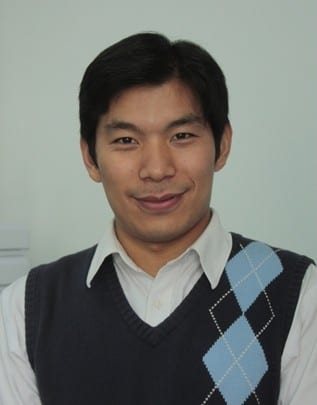 What attracted you to science and how did you get to where you are now?

I think it was my curiosity about how nature works which attracted my early interest in science. My teachers as I grew up, my research advisors, as well as my wonderful collaborators promote me to be a researcher in the filed of biomedical engineering. Besides, supports from my family and my talented students are greatly appreciated.

Were there any strong childhood influences that lead you to this career?

I like reading the stories of famous scientists such as Albert Einstein, Isaac Newton, Alfred Nobel, Thomas Edison, and Benjamin Franklin. They have made a deep impression on me, for their intelligence and wisdom, and/or their long and hard journey of scientific discovery.

How did you view science and scientists as a child?

When I was a child, science is a mysterious subject and a highly respected career for me. However, being a scientist is a faraway dream to me at that stage.

What (or who) have been your biggest influences or motivation?

I would like to acknowledge four people who influenced me the most in this career path. Prof. Yunyu Shi, Prof. Tongwen Xu and Prof. Pingsheng He in University of Science and Technology of China, and Prof. Younan Xia in Washington University in St. Louis. Their sustained supports helped me a lot in the development of my research career.

What would you have done if you had not taken this career path?

I dreamed to be a doctor or a writer for a column in a newspaper during my high school years. But I changed my mind and decided to be a scientific researcher when I was an undergraduate student in the University of Science and Technology of China. I did not consider the possibility of taking a different career path from then on.

What got you interested in biomaterials and biomedical engineering as a subject, and how did you develop your current interests in dendrimers?

My undergraduate major was polymer chemistry and I transferred my interest in polymer to structural biology when I was a PhD student. After that, I chose a postdoctoral position on biomedical engineering in Washington University in St. Louis. I am very interested in doing research in interdisciplinary subjects covering chemistry, materials, polymers, biology, and medicine. Biomaterials and biomedical engineering are perfectly suitable platforms for me. My interests in dendrimers started with Prof. Tongwen Xu when I was a sophomore student in the University of Science and Technology of China. Thanks to the career enlightenment by Prof. Xu, I focused on these amazing polymers for ten years.

What influence do you believe your work will have?

What do you enjoy most about your work?

I mostly enjoy the moment when I get new ideas about the projects and when the proposed ideas are realized through well-designed experiments.

Yiyun Cheng is a Full Professor of Biomedical Engineering at the School of Life Sciences, East China Normal University. He received his PhD from the University of Science and Technology of China under the mentorship of Professor Yunyu Shi and was a postdoctoral fellow at Washington University in St. Louis with Professor Younan Xia.

Yiyun has won the CAS President’s Excellent Award, the Excellent PhD Thesis Award of the Chinese Academy of Science, the Shanghai Dawn Scholar, and the New Century Excellent Talents in the Universities of Ministry of Education, China. He is the Regional Editor of Current Drug Discovery Technologies and an Editorial Board Members for five international journals, and has reviewed for more than 50 international journals.

Yiyun has published more than 40 peer-reviewed manuscript in journals including Nature Materials, Chemical Reviews, Chemical Society Reviews, and the Journal of the American Chemical Society with a total citation count of more than 800. His research interests are focused on the biomedical applications of dendrimers and other dendritic polymers.