Vermicular iron castings are resistant to changing temperatures for commercial vehicles and the railway industry. 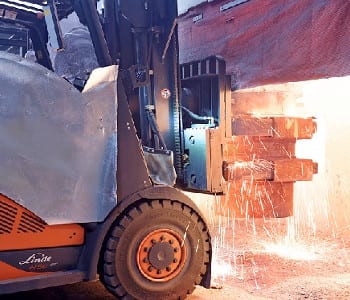 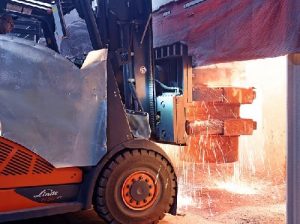 Compacted graphite iron (CGI), also known as vermicular graphite iron is a metal which is gaining popularity in applications that require either greater strength, or lower weight than regular cast iron. The graphite differs in structure from that in gray iron; the graphite particles are shorter and thicker. This results in stronger adhesion between the graphite and the iron giving the material a greater tensile strength.

Typically, CGI is used for the the railway industry, more recently compacted graphite iron has been used for diesel engine blocks as it withstands high combustion pressures. It is also used for turbo housings and exhaust manifolds. In the latter case to reduce corrosion.

Now the German foundry ACO Guss reportes about an improved system with an automated wire-treatment machine offering the process safety required for the production of vermicular graphite iron. As the company told, the new wire-treatment machine convinces ecologically with its improved environmental, safety and working conditions.

The material is primarily suitable for castings which are heavily burdened due to increased temperatures and temperature fluctuation in commercial vehicles and railway applications. Because of weight savings of up to 15% as opposed to grey cast iron, vermicular graphite iron is also used increasingly in lightweight construction.

This is becoming more and more important, for example in motor vehicle engineering because a lighter vehicle normally has lower fuel consumption, thus causing less emission. CGI is also an interesting material for mechanical engineering: e.g. if it is a question of accelerating moved masses fast and then bringing them to a standstill again.

Vulnerable robots change the social dynamics of a group
Revealing what's beyond the 3D curvilinear architecture of reality
Looking forward to developments in smart contact lenses
Phase engineering and the final frontier!