Why does Oreo cream stick to one side of the cookie?

Mechanical engineers put Oreo cream filling through a battery of tests to understand what happens when two wafers are twisted apart. 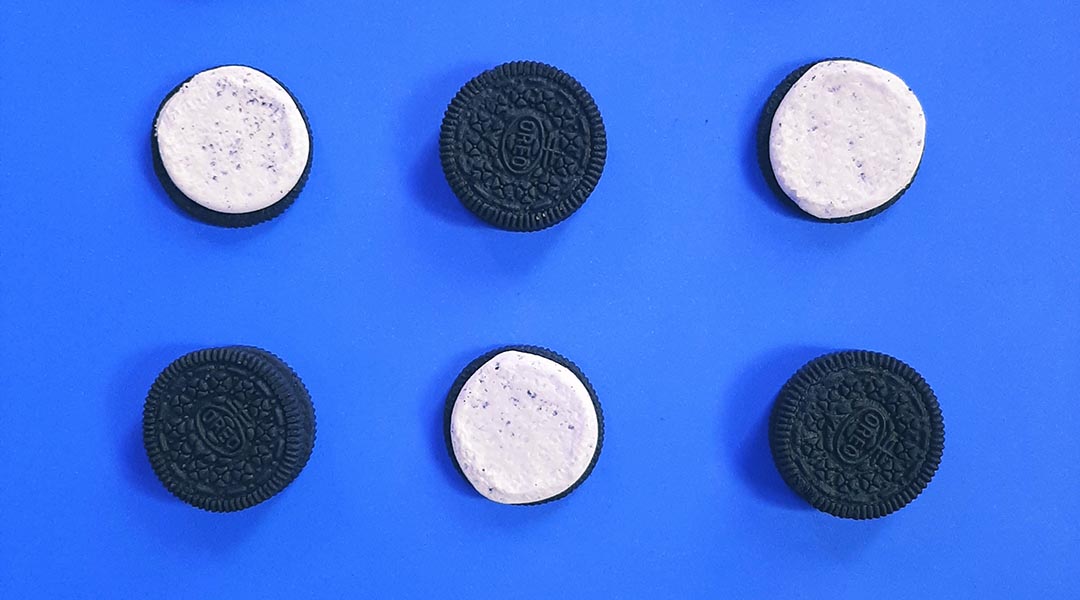 One could argue there are many ways to eat an Oreo (and nobody is here to judge) but the traditional method, if you will, uses a time-tested twist to pull the cookie apart — and every time, only one side gets all the icing. Ever wondered why?

“There’s the fascinating problem of trying to get the cream to distribute evenly between the two wafers, which turns out to be really hard,” said Max Fan, an undergraduate in MIT’s Department of Mechanical Engineering, in a statement.

To answer the question, MIT engineers turned to rheology — the study of how a non-Newtonian material flows when twisted, pressed, or otherwise stressed. The current study, said the team, was conceived during the early days of the COVID-19 pandemic, when their labs were closed.

The fluid dynamics of Oreo cream

They subjected Oreos to a number of tests, one of which places a fluid, slurry, or other flowable material onto the base of an instrument known as a rheometer. A parallel plate above the base can be lowered onto the test material, and the plate is then twisted as sensors track the applied rotation and torque.

“Scientifically, sandwich cookies present a paradigmatic model of parallel plate rheometry in which a fluid sample, the cream, is held between two parallel plates, the wafers,” explained Crystal Owens, an MIT mechanical engineering Ph.D. candidate who studies the properties of complex fluids. “When the wafers are counter-rotated, the cream deforms, flows, and ultimately fractures, leading to separation of the cookie into two pieces.”

Oreo cream is considered a “yield stress fluid”, which is normally a soft solid, but under enough stress can start to flow, similar to toothpaste or concrete. In their own version of the test, the team glued Oreo wafers to both the top and bottom plates of the rheometer and applied varying degrees of torque and angular rotation, noting the values that successfully twisted each cookie apart. They calculated the cream’s viscoelasticity or flowability, and noted the cream’s “post-mortem distribution” between wafers.

The results determined that the torque experienced by the cream when the Oreo is twisted open is similar to the torque required to turn a doorknob. And no matter the type of cookie or amount of filling, the cream almost always stuck to one wafer when twisted open — mirroring real world data. Only for older boxes of cookies does the cream sometimes separate more evenly between both wafers.

“We had expected an effect based on size,” Owens says. “If there was more cream between layers, it should be easier to deform. But that’s not actually the case.”

How Oreos are made could be the answer

To get a clearer answer, the researchers analyzed the cookie manufacturing process. “Videos […] show that they put the first wafer down, then dispense a ball of cream onto that wafer before putting the second wafer on top,” said Owens. Apparently, that little time delay may make the cream stick better to the first wafer.

They could also link whether the cream stuck to the left or right side of the wafer to where the cookie originated from in the box: cookies on the left side of the box twisted such that the cream ended up on the right wafer, whereas cookies on the right side separated with cream mostly on the left wafer. They suspect this box distribution may be a result of post-manufacturing environmental effects, such as heating or jostling that may cause cream to peel slightly away from the outer wafers, even before twisting.

In addition to providing a deeper understanding of complex fluid materials and providing an answer to this age old question, the researchers had a secondary motive: to make rheology accessible to everyone.

To this end, they designed a 3D-printable tabletop device they called an “Oreometer” that firmly grasps an Oreo cookie and uses pennies and rubber bands to control the twisting force that progressively twists the cookie open. Instructions for which can be found here.

As for the cookie itself, Owens suggests that if the inside of Oreo wafers were more textured, the cream might grip better onto both sides and split more evenly when twisted. “As they are now, we found there’s no trick to twisting that would split the cream evenly,” said Owens.