Where rocks come alive: OSIRIS-REx observes an asteroid in action

While studying asteroid Bennu up close, NASA's OSIRIS-REx spacecraft witnessed periodic outbursts of material being kicked up from the surface; a dedicated observation campaign revealed details of the activity. 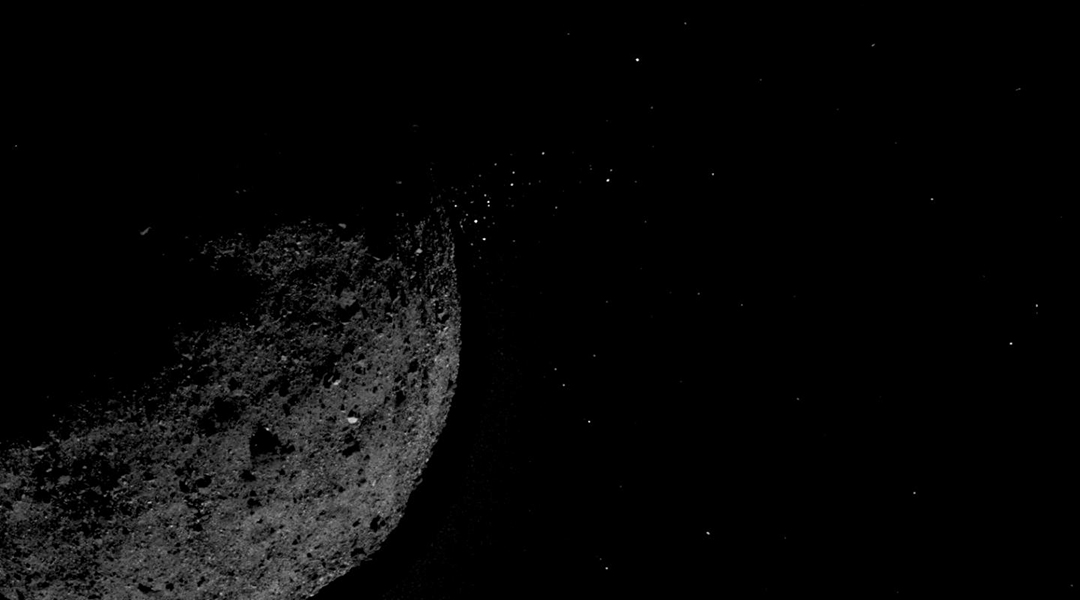 It’s 5 o’clock somewhere. And while here on Earth, “happy hour” is commonly associated with winding down and the optional cold beverage, that’s when things get going on Bennu, the destination asteroid of the University of Arizona-led OSIRIS-REx NASA mission.

In a special collection of research papers published today in the Journal of Geophysical Research: Planets, the OSIRIS-REx science team reports detailed observations that reveal Bennu is shedding material on a regular basis, most often during Bennu’s local two-hour afternoon and evening timeframe.

The OSIRIS-REx spacecraft has provided planetary scientists with the opportunity to observe such activity at close range for the first time ever, and Bennu’s active surface underscores an emerging picture in which asteroids are quite dynamic worlds. The fleeing particles are the beginning of many revelations – from its gravitational field to its interior composition, Bennu’s charisma continues to unfold for the team.

The publications provide the first in-depth look at the nature of Bennu’s particle ejection events, detail the methods used to study these phenomena, and discuss the likely mechanisms that cause the asteroid to release pieces of itself into space.

The OSIRIS-REx spacecraft will grab a sample from the surface of Bennu in October and return it to Earth on Sept. 24, 2023. The first observation of particles popping off the asteroid’s surface was made in January 2019, mere days after the spacecraft arrived at Bennu. This event may have gone completely unnoticed were it not for the keen eye of the mission’s lead astronomer Carl Hergenrother, a scientist in the UArizona Lunar and Planetary Laboratory and one of the lead authors of the collection and its introductory paper.

Much like ocean-going explorers in centuries past, the OSIRIS-REx space probe relies on stars to fix its position in space and remain on course during its years-long voyage. A specialized navigation camera onboard the spacecraft takes repeat images of background stars. By cross-referencing the constellations the spacecraft “sees” with programmed star charts, and course corrections can be made as necessary.

Hergenrother was poring over these images that the spacecraft had beamed back to Earth when something caught his attention. The images showed the asteroid silhouetted against a black sky, dotted with many stars – except there seemed to be too many.

“I was looking at the star patterns in these images and thought, ‘huh, I don’t remember that star cluster,'” Hergenrother said. “I only noticed it because there were 200 dots of light where there should be about 10 stars. Other than that, it looked to be just a dense part of the sky.”

A closer inspection and an application of image-processing techniques solved the mystery: The “star cluster” was, in fact, a cloud of tiny particles that had been ejected from the asteroid’s surface. Follow-up observations made by the spacecraft revealed the telltale streaks typical of objects moving across the frame, setting them apart from the background stars that appear stationary due to their enormous distances.

“We thought that Bennu’s boulder-covered surface was the wildcard discovery at the asteroid, but these particle events definitely surprised us,” said Dante Lauretta, OSIRIS-REx principal investigator and professor in the UArizona Lunar and Planetary Laboratory. “We’ve spent the last year investigating Bennu’s active surface, and it’s provided us with a remarkable opportunity to expand our knowledge of how active asteroids behave.”

Since arriving at the asteroid, the team has observed and tracked more than 300 particle ejection events on Bennu. According to the authors, some particles escape into space, others briefly orbit the asteroid, and most fall back onto its surface after being launched.

Using data collected by NASA’s OSIRIS-REx mission, this video animation shows the trajectories of particles after their emission from asteroid Bennu’s surface. The animation emphasizes the four largest particle ejection events detected at Bennu from December 2018 through September 2019. Additional particles, some with lifetimes of several days, that are not related to the ejections are also visible. (Credit: M. Brozovic/JPL/Caltech/NASA/University of Arizona)

The spacecraft is equipped with a sophisticated set of electronic eyes – the Touch-and-Go Camera Suite, or TAGCAMS. Although its primary purpose is to assist in spacecraft navigation, TAGCAMS has now been placed into active duty spotting any particles in the vicinity of the asteroid.

Using software algorithms developed at UArizona’s Catalina Sky Survey, which specializes in discovering and tracking near-Earth asteroids by detecting their motion against background stars, the OSIRIS-REx team found the largest particles erupting from Bennu to be about 6 centimeters (2 inches) in diameter. Due to their small size and low velocities – like a shower of tiny pebbles in super slow motion – the mission team does not deem the particles a threat to the spacecraft.

“Space is so empty that even when the asteroid is throwing off hundreds of particles, as we have seen in some events, the chances of one of those hitting the spacecraft is extremely small, and even if that were to happen, the vast majority of them are not fast or large enough to cause damage,” Hergenrother said.

During a number of observation campaigns between January and September 2019 dedicated to detecting and tracking mass ejected from the asteroid, a total of 668 particles were studied, with the vast majority measuring between 0.5 and 1 centimeters (0.2-0.4 inches) and moving at about 20 centimeters (8 inches) per second, about as fast – or slow – as a beetle scurrying across the ground. In one instance, a speedy outlier was clocked at about 3 meters (9.8 feet) per second.

On average, the authors observed one to two particles kicked up per day, with much of the material falling back onto the asteroid. Add to that the small particle sizes, and the mass loss becomes minimal, Hergenrother explained.

“To give you an idea, all of those 200 particles we observed during the first event after arrival would fit on a 4-inch by 4-inch tile,” he said. “The fact that we can even see them is a testament to the capabilities of our cameras.”

The authors investigated various mechanisms that could cause the phenomena, including released water vapor, impacts by small space rocks known as meteoroids and rocks cracking from thermal stress. The two latter mechanisms were found to be the most likely driving forces, confirming predictions about Bennu’s environment based on ground observations preceding the space mission.

As Bennu completes one rotation about every four hours, boulders on its surface are exposed to a constant thermo-cycling as they heat during the day and cool during the night. Over time, the rocks crack and break down, and eventually particles may be thrown from the surface. The fact that particle ejections were observed with greater frequency during late afternoon, when the rocks heat up, suggests thermal cracking is a major driver. The timing of the events is also consistent with the timing of meteoroid impacts, indicating that these small impacts could be throwing material from the surface. Either, or both, of these processes could be driving the particle ejections, and because of the asteroid’s microgravity environment, it doesn’t take much energy to launch an object from Bennu’s surface.

“The particles were an unexpected gift for gravity science at Bennu since they allowed us to see tiny variations in the asteroid’s gravity field that we would not have known about otherwise,” said Steve Chesley, lead author of one of the studies published in the collection and senior research scientist at NASA’s Jet Propulsion Laboratory in Southern California. “The trajectories show that the interior of Bennu is not uniform. Instead, there are pockets of higher and lower density material inside the asteroid.”

Of the particles the team observed, some had suborbital trajectories, keeping them aloft for a few hours before they settled back down, while others fly off the asteroid to go into their own orbits around the sun.

In one instance, the team tracked one particle as it circled the asteroid for almost a week. The spacecraft’s cameras even witnessed a ricochet, according to Hergenrother.

“One particle came down, hit a boulder and went back into orbit,” he said. “If Bennu has this kind of activity, then there is a good chance all asteroids do, and that is really exciting.”

As Bennu unveils more of itself, the OSIRIS-REx team continues to discover that this small world is glowingly complex. These findings could serve as a cornerstone for future planetary missions that seek to better characterize and understand how these small bodies behave and evolve.

Press release provided by the University of Arizona

Does dark matter really exist?
Largest known comet from Oort Cloud captured by Hubble
A bright future for supernovae
Hubble helps uncover the mystery of the dimming of Betelgeuse