What Happens to Water When Forests are Thinned in Dry Regions?

Extended droughts, or droughts that are warmer or more frequent than they have been in the past, can have large consequences on water availability, forest productivity, and forest mortality. 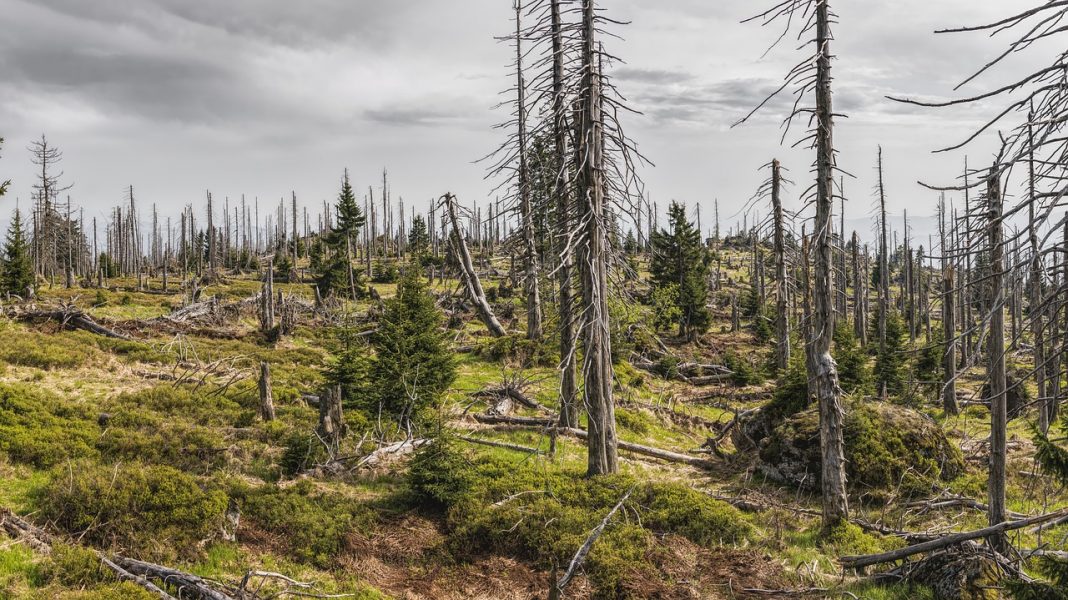 Recent droughts in Mediterranean forests have been linked with fires, widespread forest mortality, and reductions in water supply for urban and agricultural uses. These human and ecological consequences of drought have motivated much discussion on potential mitigation options. Treatments that reduce the density of forests—either through controlled burning or mechanical removal of understory vegetation and selected overstory trees—are frequently proposed as a strategy to accomplish this.

Why density reduction? Decades of fire suppression in many forests have led to measurably denser forests. Links between greater forest density and enhanced fire severity have been documented, although relationships vary substantially across forest types and geoclimatic regions. While the primary goal of density reduction is often to reduce fire severity, the potential for increasing water availability is also frequently used in arguments to support forest management actions.

There are two important ways in which reducing forest density might alter the water cycle: 1)  water that was previously used by removed vegetation may be ‘released’ and increase groundwater recharge and/or surface water levels, and 2) remaining vegetation may use this ‘released’ water, thus ameliorating drought stress and reducing mortality and productivity losses. While both of these ecohydrologic benefits are theoretically possible, forest management decisions require information about their likelihood, magnitude, and whether there may be other competing mechanisms that would either increase or suppress these desired responses.

To address this need, in a new WIREs Water review, Tague and colleagues review and create state-of-the-art science on the ecohydrology of changing forest density, particularly for regions with a Mediterranean climate, which was chosen for two reasons. First, these regions are particularly vulnerable to drought and related consequences including fires, forest mortality, and water scarcity. Furthermore, climate change models predict that droughts will become more frequent and more severe for many of these regions.

Second, the ecohydrologic impacts of density reduction in Mediterranean climates can be particularly complicated. The pattern of winter precipitation and summer dryness in these regions  means that water availability is disconnected in time from when plants and people need it. Vegetation is often sparse relative to more humid systems, which can increase evaporation losses from understory vegetation and soils, and therefore counteract some of the hydrologic benefits of thinning. Many of these regions also have seasonal snowpack, meaning that density reduction can change the timing and amount of snow in complex ways. This can substantially reduce summer water supply and vegetation water use. 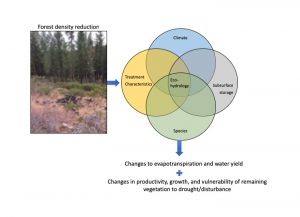 The WIREs review examines studies that use observations of responses to both density reductions and models, and offers a guide for assessing when and where density reduction will likely achieve desired management objectives. They find that in Mediterranean regions, compensating factors, such as increases in evaporation and transpiration of the understory, soil, and neighboring or downslope trees, often substantially reduce the benefits to groundwater recharge or water supply.  They emphasize that the potential gains in water supply with thinning in Mediterranean forests are likely to be small and short-lived. There may be strategies that can maximize water yield benefits through site selection, particular thinning prescriptions and rotations, but further research is needed to develop these.

The authors find more evidence for benefits to neighboring trees, however, as many studies show some increased growth of remaining trees following forest reduction.  Their review also highlights a lack of information about multi-year effects. Most studies focus on the first few years following density reduction, but it is clear that longer terms effects may be equally important, particularly given the expense of repeated density reduction. The authors also caution that short term increases in drought resilience can increase forest biomass, leading to ‘too much of a good thing’, which can subsequently increase forest vulnerability when a more severe drought occurs.

The review concludes by emphasizing the need for improved analysis and tools that can provide location-specific estimates and account for small-scale hydrologic effects associated with thinning (e.g., changes in snow melt gaps, understory/overstory relationships, species-specific ecophysiological adaptations to water availability, and species change during recovery). These processes are absent in many models, and may be particularly important in Mediterranean systems. To support managers in developing forest management strategies to mitigate the effects of drought, new tools are needed that disentangle sometimes conflicting findings from case studies, while also providing information about density reduction effects at multiple time scales and for current and projected future climates.