Water, reciprocity, and the anthropocene in the Himalayas

In the Himalayas, where the ontology of water is not always premised on the creations of boundaries between nature and culture, the condition of water, whether abundant or scarce, has key implications for cultural life. 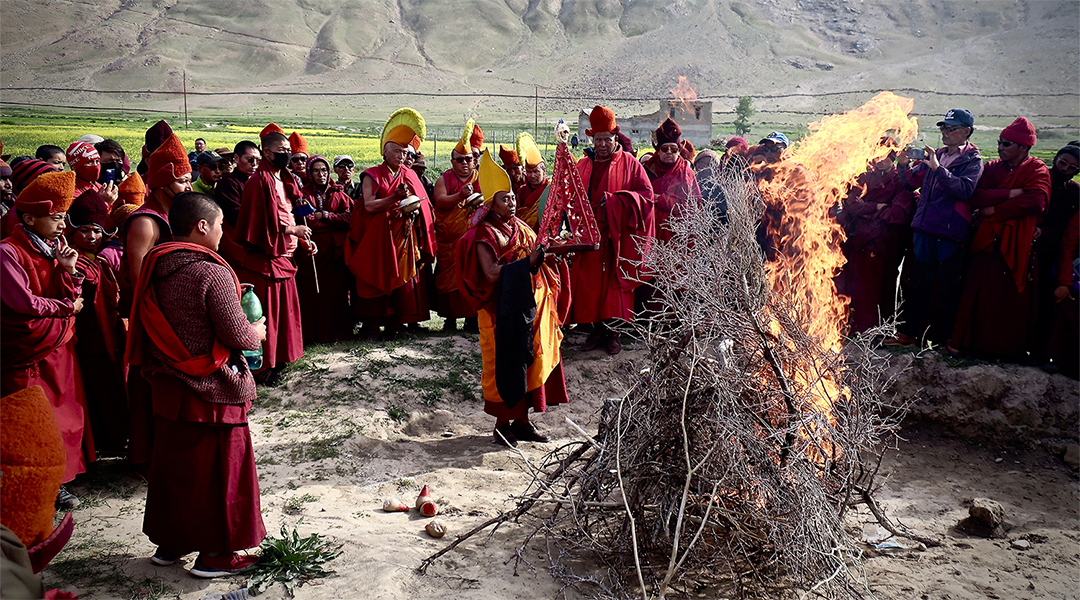 What causes water scarcity when water is understood on a paradigm that does not separate nature and culture? When water is seen not only as a substance, but as an element that binds the realms of the social and the ecological in principles of reciprocity?

In the Himalayas, where the ontology of water is not always premised on the creation of boundaries between nature and culture, an approach typical of the scientific rationality, the condition of water, whether abundant or scarce, has key implications for cultural life. Water is often conceived by local populations of the Himalayas as being part of a network of reciprocity and produced through ethical actions. Its materiality, that is, water’s properties and qualities, is seen as a manifestation of how people are acting in the world according to a locally-defined set of moral values. As per these values, humans have a moral responsibility to care for the animals, the land, and divine beings.

Today, water stress is increasingly putting pressure on farmers and herders of the Himalayas. Snowfall and glacial melt, two crucial sources of irrigation water, have decreased, forcing some farmers to leave parts of their land uncultivated. These changes are taking place amid intensified production activities by different states in the Himalayas, from the building of roads, the development of hydro projects, heavy militarization, state management of natural resources in minority areas, and the promotion of tourist activities. While these changes bring with them a lot of anticipation and speculation about how the region will be transformed, they are also seen by some as having implications for the production of water as they do not hold the promise of preserving values with which communities have long identified.

In a recent study, Karine Gagné of the University of Guelph reviewed empirical studies that illuminate the realm of beliefs and practices linked to water in the “Buddhist Himalayas,” a notion that refers both to a geography, and to the perspectives that are informed by beliefs that can be associated with Tibetan Buddhism. While this illustrates how water is seen as being made through ethical actions in the Himalayas, it also offers insights on the perceived implications that developments currently taking place in the region have on the state of water. This review contributes to narratives about the Anthropocene, the era in which human activity impacts the planet. The Anthropocene is often conceived in terms of the major ecological crisis it signals. But as scholars have argued, the Anthropocene is not just an epoch characterized by the acceleration of the loss of nature, but also the loss of culture.

These reflections have much resonance with how people experience changes related to climate change in the Himalayas, which are often interpreted along registers of loss. While farmers and herders of the Himalayas understand the changes brought about by climate change through the same observations as those conducted by science – for instance, receding glaciers – they see these phenomena as having a moral origin. For in the Buddhist Himalayas, the secular, the sacred, and the moral intermingle in people’s interpretation of the world. Accordingly, changes to water (such as reduced snowfall, melting glaciers, drying water sources) brought about by climate change have a specific local cultural resonance. Here, climate change is not something that transcends the local scene, but rather, is a phenomenon for which local people have a direct responsibility. It is seen as a consequence of the erosion of human values and dispositions toward nonhuman others, or changing morals defined by increasingly prevalent anthropocentric values.

Considering water as the materiality of ethics means asking how the qualities of water resonate for people in specific localities, at a specific moment in time. To do so, the review focuses on three perspectives of the production of water: how water is produced as people interact with a sacred geography, how snowy peaks are produced as objects of morality through affective attachment and encounters, and how water is produced as part of multi-species assemblages, a process that has implications for the current changes in the climate, the weather, and the environment. Together, these three perspectives shed light on some of the specificities of the Anthropocene in the Himalayas. This is important because as a planetary narrative, the Anthropocene can obscure the fact that it has specific local realities.

Reference: Karine Gagné , ‘The materiality of ethics: Perspectives on water and reciprocity in a Himalayan Anthropocene‘. WIREs Water (2020). DOI: 10.1002/wat2.1444