Visible and NIR-responsive polymers for microfabrication 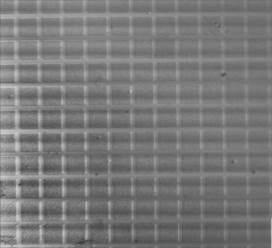 Photosensitive polymers can be used in controllable release and photoresist applications. As a photoactive side chain of polymers, the o-nitrobenzyl group has been incorporated into photoresist materials, light-dissociable block copolymer micelles for release applications, and biologically active caged compounds. However many of these compounds absorb in the UV meaning poor light penetration, limiting their practical use.

In the Journal of Applied Polymer Science, Ming Jin (Tongji University) and Linyong Zhu (East China University of Science and Technology), and colleagues describe the synthesis of a new photosensitive monomer, (E)-5-(4-ethoxystyryl)‑2-nitrobenzyl methacrylate (ENbMA). They go on to report its copolymerisation with polymethacrylate which produces a series of copolymers (P(ENbMA– MMA)s) with a pi-conjugated o-nitrobenzyl ester as phototrigger side chain. The monomer and copolymers can be photolysed using visible and near infrared light. The synthetic approach builds on previous work showing that elongation of the conjugated p-system or increasing the power of the donor and acceptor groups for o-nitrobenzyl can redshift the absorption maximum and enlarge the corresponding molar absorption coefficient as well as the two-photon absorption cross-sections.

The ENbMA monomer and P(ENbMA– MMA)s are both one- and two-photon sensitive. After exposure to visible light, the photodecomposed products of the copolymers are soluble in a common base developer, enabling the authors to photopattern a thin polymer film. As well as this, the large two photo absorption cross-sections of the copolymers allowed the authors to micropattern films using 800 nm light.