Internal ribosome entry sites (IRES) are used by some viruses to hijack the host cellular translation machinery for their own translation. 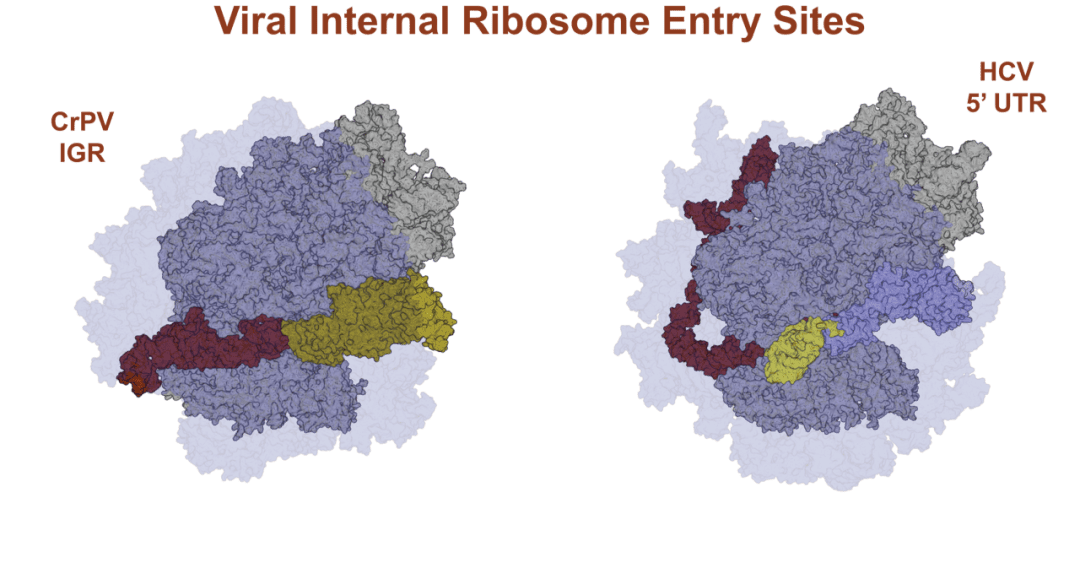 Translation is the mechanism by which proteins are synthesized by ribosomes using a template messenger RNA (mRNA). As proteins perform a vast array of functions within organisms, translation is tightly controlled to allow efficient responses of the cellular metabolism to various stimuli. Since translation control is so important for cellular integrity, viruses often target host cell translation. Translation initiation is one of protein synthesis bottlenecks. In eukaryotes, translation initiation is a multifactorial process that classically begins with the recognition of a 7-methylguanylate cap (m7G) located at the 5′ end of mRNAs. In order to hi-jack the host cellular translation machinery for their own translation, some viruses have been shown to use an alternative initiation mechanism, mediated by internal ribosome entry sites (IRES).

An advanced review in WIREs RNA by Mailliot and Martin details the current knowledge of viral IRES. IRES are structural RNA motifs that have evolved to specific folds that recruit the host ribosomes on the viral coding sequences in order to synthesize viral proteins. Most IRES were discovered in viruses belonging to the general order of Picornavirales, but some have also been described in viruses from yet unassigned orders in families such as the Flaviviridae or Retroviridae. These viruses often encode proteins targeting the host translation mechanisms in order to shut down host translation and/or to boost viral translation. Extensive functional and structural investigations of IRES over the past decades have allowed a better understanding of their mode of action for viral translation, and viral IRES have thereby been classified into four classes, based on their structure and mode of action.

By stimulating translation of viral proteins to the cost of host translation, it was shown that IRES are critical for viral propagation, virulence, pathogenicity and tissue tropism. Since viral translation has such a pivotal role in the infectious program, IRES thus represent attractive therapeutic targets.

Business as usual … on the edge: Neuronal outgrowths do their own maintenance
RNA thermometers to bring down bacteria from the inside
A fresh take on generating body proportions
Can bacteria survive in space?