A review in Macromolecular Bioscience highlights the current uses and potential new development of polymeric therapies in the fight against HIV. 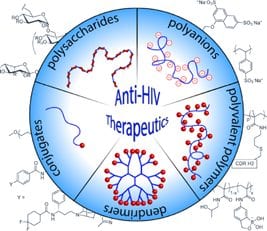 Despite decades of research, HIV continues to be a significant global health issue. With particularly high rates of occurrence in the developing world, it is estimated that a new case is identified every 5 minutes. Polymer therapeutics are used at several stages of the HIV life cycle, both in reducing transmission and infection, and in the treatment of infected individuals. The constant development of new therapies is required due to increasing viral resistance to existing drugs, and the toxicity of many established treatments. A review in Macromolecular Bioscience, featured in the Best of Macromolecular Journals Edition 2016 and now available free, highlights the current uses and potential new development of polymeric therapies in the fight against HIV.