researchers at MIT and Brookhaven National Laboratory have found a whole new avenue in li-ion battery research: the use of disordered materials. 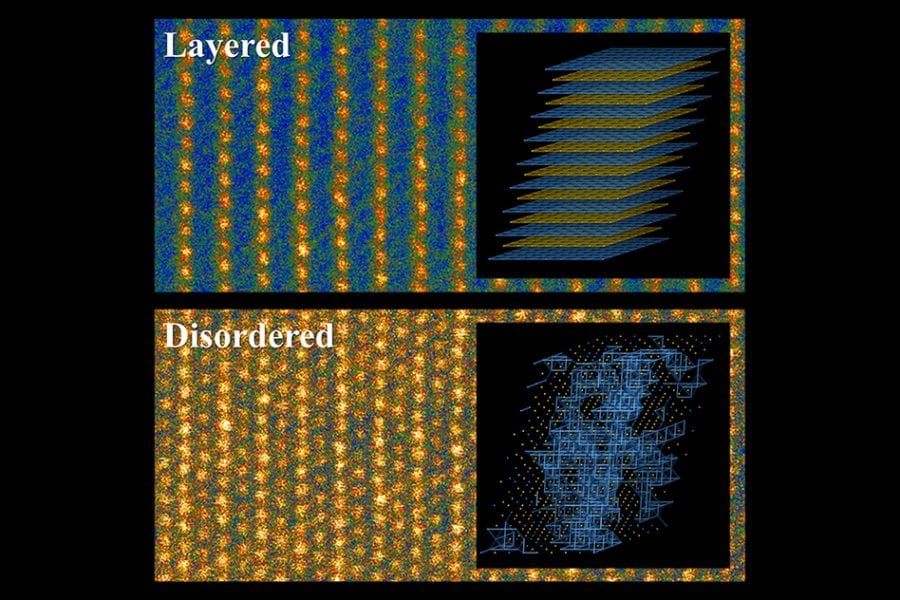 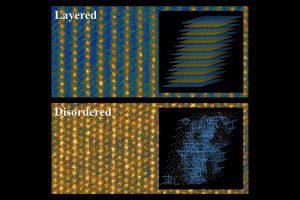 Conventional layered lithium and transition metal cathode material (top) and the new disordered material studied by researchers at MIT (bottom) as seen through a scanning transmission electron microscope. Inset images show diagrams of the different structures in these materials. (In the disordered material, the blue lines show the pathways that allow lithium ions to traverse the material) Image courtesy of the researchers.

Lithium batteries, with their exceptional ability to store power per a given weight, have been a major focus of research to enable use in everything from portable electronics to electric cars. Now researchers at MIT and Brookhaven National Laboratory have found a whole new avenue for such research: the use of disordered materials, which had generally been considered unsuitable for batteries.

In a rechargeable lithium-based battery, lithium ions are pulled out of the battery’s cathode during the charging process, and returned to the cathode as power is drained. But these repeated round-trips can cause the electrode material to shrink and expand, leading to cracks and degrading performance over time.

In today’s lithium batteries, those cathodes are usually made of an orderly crystalline material, sometimes in a layered structure. When slight deviations from that perfect order are introduced, the battery’s efficiency generally goes down — so disordered materials have mostly been ignored in the search for improved battery materials.

But it turns out this correlation is far from universal: Certain kinds of disorder can provide a significant boost in cathode performance, the researchers have found through a combination of computer modeling and laboratory experiments. These surprising findings are reported this week in the journal Science, in a paper by MIT graduate student Jinhyuk Lee, professor of materials science and engineering Gerbrand Ceder, and four others.

Ceder describes the materials that can release and then reabsorb the lithium ions as a kind of “reversible sponge.” In today’s batteries, the cathodes are striated materials, made up of lithium layers alternating with oxides of transition metals. Scientists had thought the layering was necessary to provide a pathway for lithium to pass in and out of the cathodes without bumping into the transition metal oxide layer — “a channel with nothing in the way,” as Ceder says.

But it turns out that a significant excess of lithium in the material changes things dramatically. In the traditional ordered structure, there is an exact balance between the number of lithium and metal atoms. “But if you get enough of a lithium excess,” Ceder says, “you get new channels, and they can take over from the channels you close off.”

The new material — in these experiments, lithium molybdenum chromium oxide — “has a very high dimensional stability,” Ceder says. In most other lithium cathode materials, “as you pull the lithium in and out, it changes dimension, swelling or contracting.” This swelling and contracting “causes all sorts of problems,” including fatigue that can lead to cracking, he says.

While the dimensional changes in layered materials can be as much as 5 to 10 percent, he says, in the new disordered material it is only about 0.1 percent — “virtually zero.”

Ceder stresses that his group’s analysis of this specific compound “shows a new direction that we can take” in searching for even better materials, opening a whole new category of possibilities that had previously been ignored. While lithium molybdenum chromium oxide can hold and release significantly more lithium than existing materials, it produces a lower voltage — meaning its overall performance is about the same as that of existing materials, he says.

Many new materials take decades to move from the laboratory to useful applications, but “we’re hopeful we can do this in one or two years, to discover something better,” Ceder says — most likely by using computational tools such as the Materials Project, which he co-founded.

Jeff Dahn, a professor of physics and atmospheric science at Dalhousie University in Nova Scotia who was not involved in this work, says, “These experimental results are very surprising.” While it remains to be seen “whether this finding can be translated in similar experimental results in more practical materials,” he says, this research “is a nice combination of experiment and theory.”