Scientists are closer to understanding the formation of underwater megaplumes, large and powerful columns of heated water rising from the ocean floor. 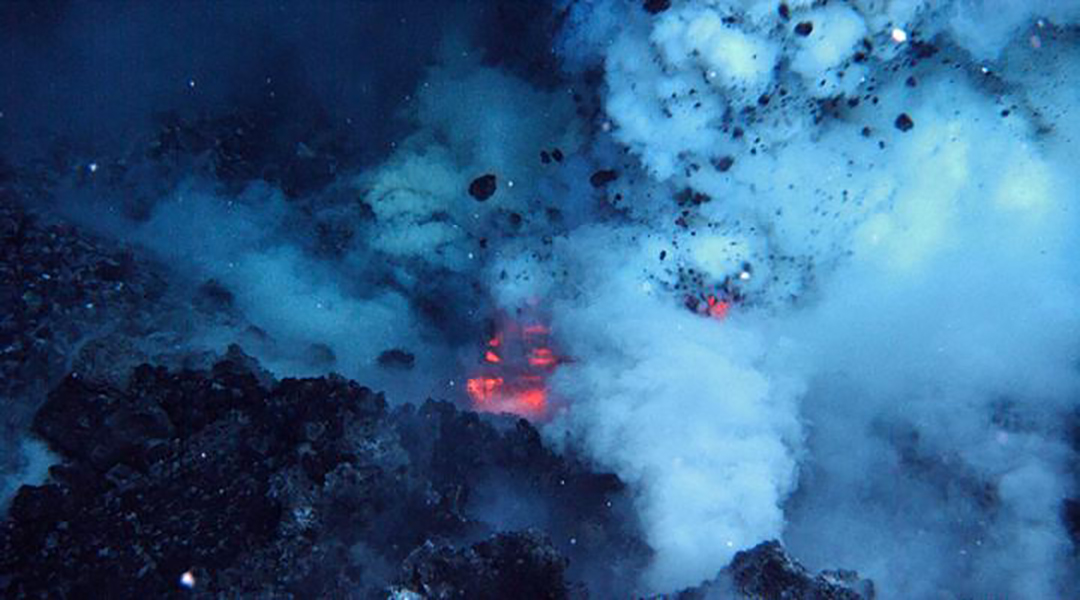 The vast majority of Earth’s volcanism occurs underwater in the deep oceans. However, submarine volcanoes were, for a long time, considered less remarkable than those on land. While terrestrial volcanoes often produce spectacular eruptions, dispersing volcanic ash into the environment, it was thought that deep marine eruptions only produced slow moving lava flows and were therefore of little consequence outside of academic intrigue.

That is, until a team of researchers from the University of Leeds determined that these underwater volcanic eruptions, occurring deep within the ocean, release large amounts of powerful energy (~1016 – 1017 J) at a rate high enough to power the whole of the United States.

The data, gathered by remote controlled deep-sea vehicles deployed in the North East Pacific, have revealed a link between the way ash is dispersed during submarine eruptions and the creation of large and powerful columns of heated water rising from the ocean floor, known as megaplumes.

“The majority of Earth’s volcanic activity occurs underwater, mostly at depths of several kilometers in the deep ocean but, in contrast to terrestrial volcanoes, even detecting that an eruption has occurred on the seafloor is extremely challenging,” said David Ferguson, one of the study’s authors. “Consequently, there remains much for scientists to learn about submarine volcanism and its effects on the marine environment.”

Despite the apparent link with active volcanism, the mechanism through which megaplumes form remains unknown and understanding this process is challenging because few observations of active deep marine eruptions exist, according to the authors.

Once formed, megaplumes act in the same way as volcanic plumes on land, carrying hot, chemical-rich water and volcanic ash outward from the volcano. Using a newly developed mathematical model, the two researchers used historical underwater eruption ash patterns to reconstruct the dynamics of how the megaplumes would have been expelled and spread to the surrounding ocean floor. From this, they could then calculate the rate of energy required to carry ash to the observed distances, which turned out to be quite dramatic: their calculations indicate that the volume of water required to generate these enormous plumes would have to be equivalent to forty million Olympic-sized swimming pools.

These findings indicate that the energy required to generate these megaplumes is extremely high and rapid, and could not have been supplied by erupted lava alone. Instead, the research concludes that submarine volcanic eruptions lead to the rapid emptying of reservoirs of hot fluids within the earth’s crust. As the magma forces its way upwards towards the seafloor, it drives this hot fluid with it.

Next steps will be to gather real-world data to support this theory. “Observing a submarine eruption in person remains extremely difficult but the development of instruments based on the seafloor means data can be streamed live as the activity occurs,” said Ferguson. “Efforts like these, in concert with continued mapping and sampling of the ocean floor means the volcanic character of our oceans is slowly being revealed.”

With the ever-growing demand to switch to more sustainable sources of energy, creative solutions, such as this could be the way forward, though how this power could be captured and converted into meaningful energy remains a challenge for future studies — but if we’ve learned anything in the last year, it’s to not underestimate the innovative capabilities of scientists.

A sprayable chemical sensor for better environmental monitoring
What ancient microbes can tell us about the environment they inhabited
Climate finance today has greater reach, but more private influence
The world's most efficient lithium-sulfur battery