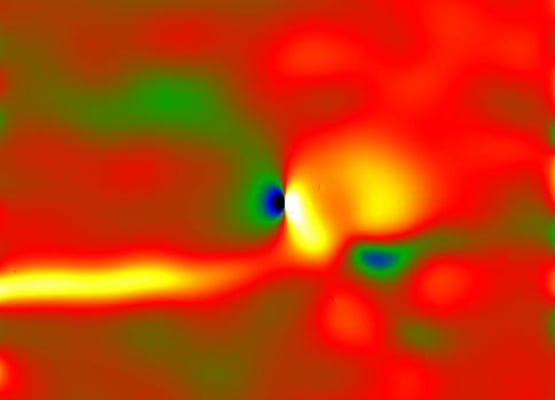 Lithium ion batteries, essentially electrochemical cells, have made a major contribution to the almost universal adoption of portable electronics such as cell phones and laptops, and are expected to be the premier choice for electrical vehicles. Therefore, many research groups around the globe are working to improve the energy and power of Li-ion batteries, making them applicable to transportation sector.

However, occasionally these batteries fail, and the associated safety concerns can cause difficulties – for example, the recent grounding of Boeing’s new Dreamliner aircraft.

Many battery researchers aim to know what reactions inside the batteries lead to such catastrophic failures. But this is a challenge as the battery electrodes are immersed in liquid electrolytes and the system is often sealed, making problems difficult to diagnose.

Now, in new work led by a group at the Michigan Technological University (MTU) with collaborators from the University of Illinois at Chicago (UIC), Zhejiang University in China, and King Abdullah University of Science & Technology in Saudi Arabia, researchers have obtained crisp, clear atomic images of an li-ion battery electrode during charging, paving the way for more accurate visualization of electrochemical reactions inside these batteries.

To achieve this goal, the researchers built a small-scale battery cell made of Li metal, with Li2O as the electrolyte and an SnO2 nanowire as the counter electrode. The battery cell was then placed in the high vacuum of the state-of-the-art aberration-corrected scanning transmission electron microscope (AC-STEM) available at UIC. This type of microscope has the capability to reach resolution better than 0.7 angstron because spherical aberration – one of the shortcomings of electromagnetic lenses – is corrected.

(a) Schematic of the experimental setup. (b) High angle annular (HAADF) image taken from the reaction front of a partially lithiated SnO2 nanowire. (c) Schematic of lithium diffusion path between two off-centered octahedral sites in SnO2 structure along [001] direction. (d) Higher magnification HAADF image showing the lithiation strips along the SnO2 nanowire. (e) Atomic resolution HAADF image of the tip of one lithiation strip. (f) The strain mapping along the [010] direction corresponding with (e) Atomic resolution HAADF image. The dislocation core with higher strain is clearly shown in this strain map. Color range +/-15%.

The application of negative voltage on the SnO2 nanowire forces the Li ions from the Li metal to pass through the Li2O electrolyte and reach the nanowire. This is where the team made their major contribution. “We watched as Li ions entered the SnO2 crystal structure and recorded the subsequent events.” Dr. Shahbazian-Yassar, an associate professor of Mechanical Engineering at MTU and a visiting associate professor at UIC, explains. “It is quite intriguing to see that Li ions do not follow a ‘random walk’ within the host electrode. Instead, they look for the least energy consuming channels within the SnO2 lattice and can continue moving as long is this energy is kept at minimum”.

“The movement of foreign Li ions along this channels induces some strains in the crystal lattice that are released by the formation of dislocations”, Dr. Anmin Nie, a postdoctoral researcher at Dr. Shahbazian-Yassar’s team asserts. “This strain if becomes too much, it can result in the initiation of cracks leading to electrode fracture”, Anmin adds. The results indicate that the atomic engineering of the battery electrodes can indeed be effective in their charging or discharging performance.

What’s next? “We hope to continue this work by looking at some of the irreversible structural reactions that are responsible for the capacity fading in battery materials. We need to see what changes in the battery material design can make those reactions reversible. It is an ambitious goal but our initial results are promising. Sooner or later we will unveil the rest of this hidden world!” said Prof. Shahbazian-Yassar.