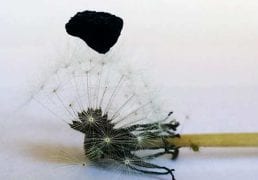 The team formed a highly porous aerogel composed of the electronically conductive soft material poly(3,4-theylenedioxythiophene):poly(4-styrenesulfonate) (PEDOT:PSS). PEDOT:PSS is widely used as an organic thermoelectric material, most often in the form of a solvent-processed film.

In this work, PEDOT:PSS aerogels were made by a unique freeze drying technique. Thick films (∼500 μm) of PEDOT:PSS were submerged in water to form a hydrogel. The hydrogel was then immersed in liquid nitrogen and placed under vacuum. The vacuum removed the water in the hydrogel, leaving behind a dried aerogel sample with high porosity. Because the aerogels contained mostly air, they had very low density, were thermally insulating and were even fire-retardant.

The aerogels are light enough to be placed on a dandelion.

The electronic performance of the aerogels was found to be nearly identical to that of the original PEDOT:PSS thick films. This shows that the performance of PEDOT:PSS does not depend on the macroscale structure of the material. This new morphology creates a path to previously unattainable device architectures and presents opportunities for the integration of thermoelectric behavior into the high surface area scaffoldings of aerogels.

Call for Nominations: Journal of Polymer Science Award
Living Well With Plastics: The Politics of the Plastics Crisis
A new technique to enhance the catalysis of nobel metal aerogels
Could Beer Waste Power Your Home?