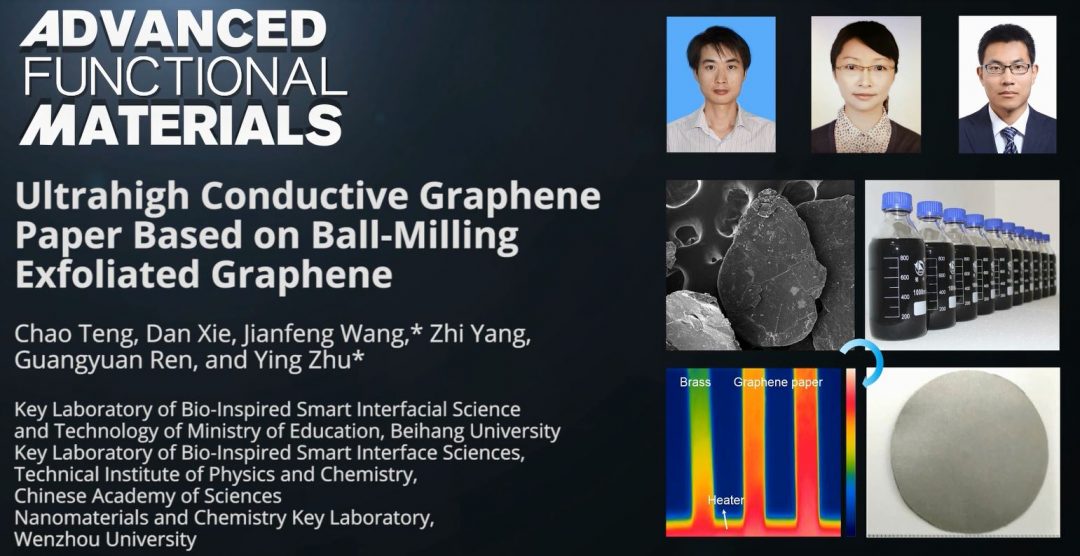 High-power, portable devices such as smart phones and tablets generate a large amount of heat during operation. This wears down the components, resulting in lower performance and a shorter lifespan. Therefore, effective heat transfer in these electronic devices is a necessity, and lightweight, highly thermally conductive materials, such as graphene, can meet these requirements.

On a macroscopic scale, it is a challenge to replicate the superior conductivity of graphene. Reduced graphene oxide paper exhibits high thermal conductivity, but its purification process generates a large amount of acidic wastewater, imposing a cost and environmental burden. To avoid waste production while maximizing the quality and conductivity of the graphene paper, Jianfeng Wang, Ying Zhu, and co-workers have developed a novel processing method.

This finely exfoliated graphene dispersion is then filtered to obtain low-density, black graphene, or F-graphene. The filtration step only takes one hour, and the NMP solvent can be reused for the subsequent ball-milling exfoliation. Although residual solvent in the graphene lowers the contact between graphene sheets, reducing the thermal conductivity, high-temperature annealing remedies this drawback. During the annealing step, the remaining NMP is completely removed and the contact between the graphene sheets is increased, greatly enhancing the thermal and electrical conductivity. Graphene at this stage is known as FA-graphene.

In the final step, mechanical compression of FA-graphene produces FAC-graphene, which is plane-defect free and has an ultrahigh electrical conductivity of 2231 S cm−1 and thermal conductivity of 1529 W m−1 K−1, making it superior to graphene paper produced in previously reported routes. This high-yielding process is amenable to large scale production for practical applications.