Tying up molecules as easily as you tie up your laces 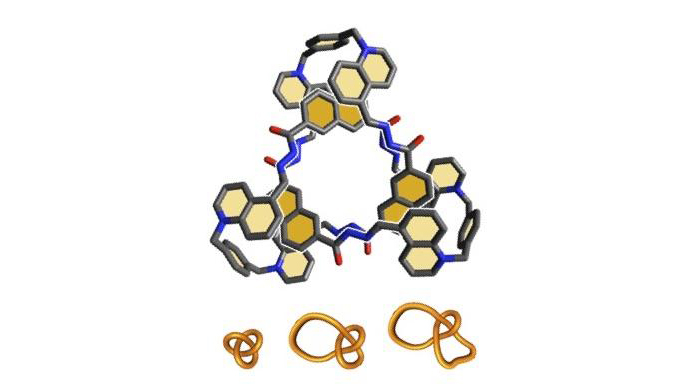 Since the 1970s, scientists have been trying to knot molecules together to create new, custom-made mechanical properties, which will give rise to new materials.

The idea of tying chemical knots first made an appearance in 1971 with the aim of creating new materials induced by the changes in mechanical and physical properties that would result from these interlocking structures. But it was not until 1989 that Jean-Pierre Sauvage, the French 2016 Nobel Prize winner in chemistry, succeeded. Scientists have subsequently worked hard at trying to form knots but it remains challenging: “To tie molecules together, you have to use metals that attach to the molecules and direct them on a very specific path forming the intersections that are needed to make knots”, explains Fabien Cougnon, a researcher in the organic chemistry at the University of Geneva (UNIGE), Switzerland. “But it is a complex process that often results in a loss of raw material of over 90%! The resulting amount of molecular knots is typically only a few milligrams at most, not enough to make new materials.”

Now, Cougnon and his team have developed a simple and effective technique for tying knots in molecules, and have for the first time observed the changes in properties that result from these interlockings. The results, which were published in Chemistry – A European Journal, open up new perspectives for designing materials and transferring information with molecules.

Hydrophobic molecules that tie together on their own

The chemists developed a new technique that makes it possible to easily create interlocked molecules. “We use fatty molecules that we soak in water heated to 70 degrees. Since they are hydrophobic, they try to escape the water at all costs, gathering together and forming a knot by means of self-assembly”, says Tatu Kumpulainen, a researcher in the Physical Chemistry Department in UNIGE’s Faculty of Sciences.

Thanks to this new technique, the team can make molecular knots effortlessly, and — even more importantly — without losing any material. “We transform up to 90% of the basic reagents into knots, which means we can consider a real analysis of the changes in the mechanical properties induced by the knots, which has never been done before!” notes Cougnon. Although they cannot choose how the molecules are knotted together, they are able to reproduce the same knot at will because the same chemical structure will always form an identical knot in aqueous environment.

Each knot has its own mechanical properties

To check the impact of their molecular knots, Cougnon and his team chose a family of molecules that all have similar characteristics: they absorb ultraviolet, are fluorescent and are highly sensitive to the general environment, especially the presence of water. “We created four knots, from the simplest to the most complex (0, 2, 3 and 4 intersections), which we compared to a reference molecule which constitutes their basis,” explained Cougnon. “To do this, we first used nuclear magnetic resonance (NMR) to observe the stiffness of the different parts of the knots and the speed and way they move relative to one another.” The scientists first observed a logical change in mechanical properties: the more complex the knots, the less the structures move.

The chemists subsequently used spectroscopy to compare the spectra of the four knots with each other. “We soon noticed that the looser single knots (0 and 2 intersections) behaved in the same way as the reference molecule”, continued Kumpulainen. “But when the knots are more complex, the molecules — which were tighter — changed their physical properties and color! Their way of absorbing and emitting light differed from the reference molecule.” This change in color means that the scientists can visualize the mechanical properties specific to each assembly, whether it is its elasticity, structure, movement, or position.

“We now want to be able to control these changes from A to Z so that we can use these knots, for example, as indicators for the properties of the environment”, says Kumpulainen. They also plan to build new materials, such as elastics, using the networks of knots now that there is no loss of material when making the intersections. “At last, we can consider transferring information inside a knot thanks to a simple change of position on a part of the knot which would be reflected throughout the structure and would convey the information”, concluded Cougnon.

Press release provided by the University of Geneva