New kind of dye could reduce the cost of two-photon microscopy by several orders of magnitude. 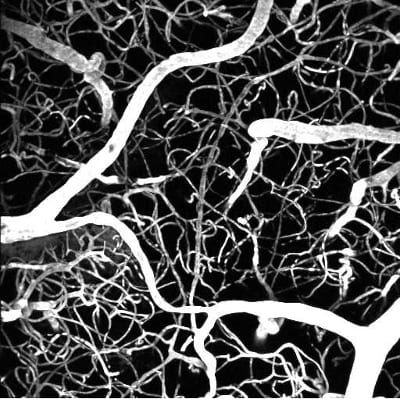 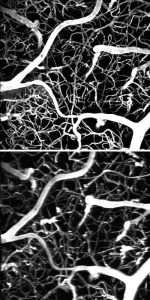 The same section of a mouse brain imaged with a femtosecond laser (above) and a much weaker laser but the new dye (below).

A dye-based imaging technique known as two-photon microscopy can produce pictures of active neural structures in much finer detail than functional magnetic resonance imaging, or fMRI, but it requires powerful and expensive lasers. Now, a research team at the University of Pennsylvania has developed a new kind of dye that could reduce the cost of the technique by several orders of magnitude.

The study was led by associate professor Sergei Vinogradov and postdoctoral researcher Tatiana Esipova, both of the Department of Biochemistry and Biophysics in Penn’s Perelman School of Medicine, along with Christopher Murray, a professor in the departments of Chemistry in the School of Arts and Sciences and of Materials Science and Engineering in the School of Engineering and Applied Science.

Two-photon microscopy involves using a powerful laser to rapidly shoot photons in a highly focused beam that can pass through living tissue. The combined energy of a pair of infrared photons that collide with a molecule of a marker dye causes it to fluoresce in the visible range. By scanning the focus of the beam over a three-dimensional space, the fluorescence of the dye can reveal even the tiniest 3D structures, such as blood capillaries in the brain and even individual cells. And by using dyes sensitive to the chemistry of specific biological processes, such as the movement of calcium ions that allows neurons to fire, the technique can even be used for functional imaging; it can sense changes in neural activity as a subject is thinking.

“It’s practically the only way to look at individual cells or even sub-cellular structures in the brain at depth,” Vinogradov said. “FMRI gives you only bigger regions; you don’t see the details. And a lot of the things we’re interested in probing are very close together.”

The drawback to this technique is that currently available dyes require tremendous amounts of energy to produce usable images. Researchers must use femtosecond lasers, which can shoot a quadrillion photon pairs a second. These lasers are very expensive, however, limiting the applications of the microscopy technique.

One possible solution would be to use a dye that fluoresces more easily. To this end, nanoparticles made from the lanthanide elements have long been investigated as molecular probes.

“These nanoparticles have an excitability that is a million to 10 million times higher than existing molecular dyes,” Vinogradov said. “That means in order to excite these nanoparticles, you could use a light source that costs closer to $200 rather than $200,000.”

The challenge was then to get lanthanide nanoparticles into the kinds of tissues researchers wanted to study, such as the brain. Because these nanoparticles aren’t soluble, they can’t safely be injected into the bloodstream. Instead of flowing along with the blood, they would sit on the bottom of blood vessels, eventually forming a clot.

Other groups had tried increasing the nanoparticle’s solubility by wrapping them in hydrophilic, or water-loving, polymers. These polymers are essentially strings with a tail that is attracted to water and a head that is attracted to the particle. In theory, the head would bind to the nanaoparticle surface and the tail would interact with the bloodstream, but, because the string would be attached to the particle by a single point of contact, it could easily fall off. Adding more particle-binding sites to the string solves one problem but creates another.

“This kind of string wraps up and glues to the particle, but none of its hydrophilic parts remains available to interact with the solvent,” Vinogradov said. “It attaches to the nanoparticle but doesn’t make it significantly more soluble.”

Vinogradov and his colleagues took a different approach, fashioning dendritic polymers. These dendrimers have multiple branches attached to a core, giving them an overall spherical shape.

“Imagine you have a tennis ball, and you stick it to a Velcro-coated wall. Because it’s a ball, there’s still a significant fraction of its surface that’s still exposed,” Vinogradov said. “We take the lanthanide nanoparticles and cover their entire surface with these hydrophilic balls. It’s a very simple geometric concept.“

Attaching these dendrimers to nanoparticles was possible due to Christopher Murray’s earlier research, which enabled a special procedure to “prime-coat” nanoparticle surfaces with a layer that facilitates their interaction with dendrimers.

The researchers tested the efficacy of this approach on a mouse model. They started by injecting a conventional marker dye and using a femtosecond laser to map the vasculature of a section of the mouse’s brain. They then switched to a laser that was a million times weaker and mapped the same region again, predictably producing no fluorescence. Finally, they kept the same weak laser but injected the dendrimer-coated nanoparticles, which allowed the researchers to produce the same imagery as in the first trial.

“This means we did the same experiment as the femtosecond laser but with one that costs hundreds of thousands of dollars less,” Vinogradov said.

This experiment was the first demonstration of use of lanthanide nanoparticles in neuromiaging as well as the first example of two-photon in vivo microscopy with simple, inexpensive lasers.

Biomaterials researchers should include sex-based differences
Infants can recover language function after a stroke
Researchers ask: Should the pharmaceutical industry be nationalized?
Keep on smiling! A fluorescent mouthguard for healthier teeth