Turning Down the Heat on Solar Fuels – Chimie Douce 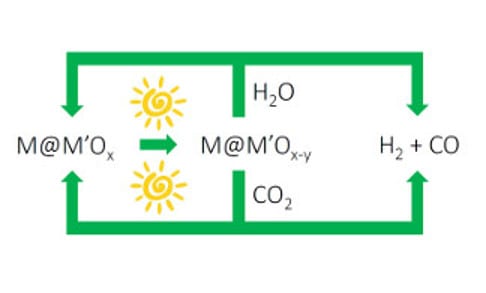 In my research, teaching and writing about chemistry and engineering solutions to climate change, I have always thought that the most efficient, scalable and cost-effective way to convert water and carbon dioxide into value added molecular energy carriers, would be a “solar fuels machine” that enables the chemical transformation of these earth abundant molecules by a gas-phase heterogeneous catalysis process.1

Demonstration of this technology at pilot-plant scale would present many opportunities for the chemical and petrochemical industries to use water and carbon dioxide in their supply chains, for the large-scale production of gaseous and liquid fuels for heating, transportation and electricity generation. It would also allow high intensity greenhouse gas emitters, such as the cement and steel industries, to valorize carbon dioxide rather than treat it as a waste product.

There exists a number of scientifically and technologically significant hurdles that include the rate, percentage and efficiency of the conversion of reactants to desired products, which still have to be surmounted in order to realize a practical “solar fuels machine”. These arise because of the ubiquitous thermodynamic and kinetic constraints of performing the conversion of water vapor and gaseous carbon dioxide to a fuel in a single step using the heat and/or light of the sun.

Even if the conversion is instead divided into two steps, one is still confronted with the challenges of firstly having to split H2O vapor to H2 and O2 and secondly, to separate the H2 from O2 so that the H2 can be utilized in the final step of the CO2 reduction reaction to produce a desired fuel.

A number of reports in the recent literature have demonstrated the gas-phase heterogeneous catalytic reduction reaction of CO2 by H2 using the heat and/or light from the sun under rather mild conditions.2 By contrast the vapor-phase H2O splitting reaction to produce the H2 required for the reduction of CO2 has typically operated at extremely high temperatures.

With respect to achieving the latter step, the most successful currently practiced methodology is solar thermal water splitting.3 It is a two-step process based upon the loss of lattice oxide as O2 from a metal oxide MOx to form the non-stoichiometric version MOx-y at temperatures typically around 1500 °C. At a lower temperature around 1000 °C, the MOx-y abstracts oxygen from H2O steam to form H2 and simultaneously reinstates the starting MOx in preparation for the next cycle. 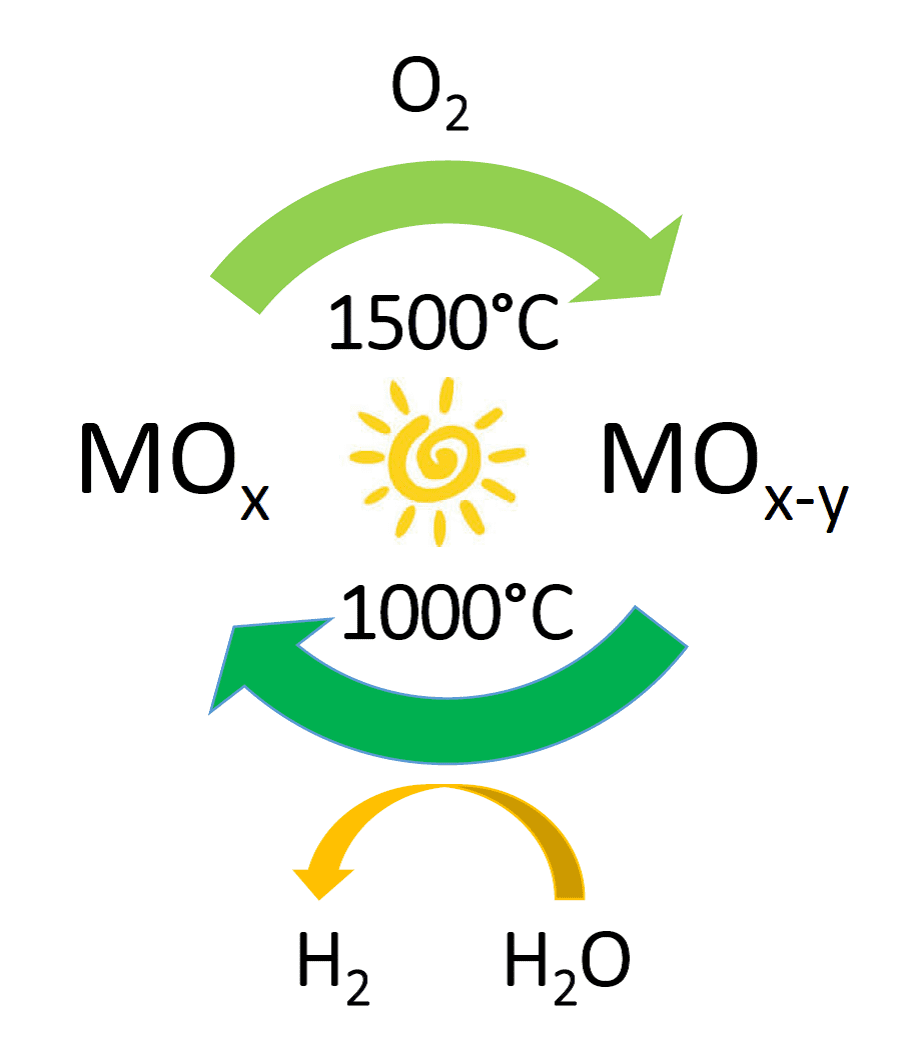 The water splitting cycle that converts the thermal energy of the sun into chemically stored energy in the form of H2, is illustrated in Figure 1. Similar cycles have been demonstrated to work well for splitting carbon dioxide into carbon monoxide.3 So the two approaches taken together can provide a solar thermal route to synthesis gas, CO/H2, the preferred feedstock for making many kinds of fuels in industry today.

While solar thermal water splitting is a most impressive and promising technology, its practice necessitates the use of high temperatures, complex reactors, demanding materials chemical and mechanical properties requirements, and is expensive to implement at scale.3 Nevertheless, recent work demonstrates that the technology is viable and that the efficiency, economics and life cycle impacts are favorable at large scale.4

If a material and method could be discovered that could enable the vapor-phase water splitting reaction, using the heat and/or light of the sun but under much less extreme temperature conditions, thereby easing materials, reactor, scaling and economic demands, then the chances of realizing a practical “solar fuels machine” would be greatly improved.

Such an advance in water splitting has been reported very recently using a metal-metal oxide nanocomposite with elemental composition based on copper and titanium dioxide, denoted Cu@TiO2.5 What’s amazing about this advance is that the solar thermal cycle, proposed to involve switchable stoichiometry Cu@TiO2/Cu@TiO2-x, works with H2O vapor to produce H2 in the temperature range of 20–140 °C using solar power of less than 1 sun. This genre of “chimie douce” is a welcome yet surprising development, because nanocrystalline TiO2 is an old friend with a long and illustrious history in the annals of water splitting photocatalysis. With more than four decades of research and development since the seminal report by Honda and Fukushima, I think it is fair to say that it has not proven to be a technologically significant water splitter in aqueous media.

What’s especially noteworthy about the Cu@TiO2 breakthrough, is that vapor-phase water splitting using TiO2 alone requires ultraviolet light and 600 °C, yet the reported Cu@TiO2 composition functions with visible light and much lower temperatures of 20–140 °C. This distinction points to the special role of copper in the composite and the unique physicochemical properties of the composite, which underpin this remarkably mild water splitting reaction.

To cut to the chase of an exceptionally detailed and impressive study, the copper in the most active form of Cu@TiO2 is prepared by simple wet impregnation of nanocrystalline TiO2 with copper acetate Cu(O2CCH3)2 followed by calcination at 400 °C. The copper is proposed to be integrated chemically (low loadings of less than 1wt%), into the titanium dioxide lattice to form Cu(II)-O(-II)-Ti(IV) surface active species.

The absorption of solar light by the composite is proposed to excite O(-II) —> Cu(II),Ti(IV) ligand-to-metal charge transfer transitions, which cause elimination of lattice O(-II) as gaseous O2 with concomitant formation of non-stoichiometric Cu@TiO2-x containing reduced metal oxidation states of copper and titanium. Evolved O2 must be flushed from the reactor in order to avoid re-oxidation of Cu@TiO2-x back to Cu@TiO2.

The favored model reported for the expulsion of oxygen from Cu@TiO2 invokes formation of reduced Cu(0)-Ti(III) with a copper-titanium bond, although based on the analytical evidence reported I believe an alternative more chemically reasonable model with an oxygen vacancy Cu(I)-[O]-Ti(III) cannot be dismissed at this early stage of the research.

Whichever description turns out to be closer to the truth, the key observation is that Cu@TiO2-x is able to abstract oxygen from steam at 140 °C to form H2 and restore stoichiometric Cu@TiO2 with the original Cu(II)-O-Ti(IV) surface active sites, thereupon completing and allowing the solar thermal water splitting reaction to be cycled.5

The H2 and O2 produced in this solar thermal water splitting cycle are formed in the expected ratio of 2:1. Reaction rates are found to be in the low µmol cm–2 g–1 with solar-to-hydrogen efficiencies approaching 1%, which are pretty encouraging metrics considering the system is far from being optimized.

It is worth noting that convincing proof that the observed H2 and O2 products with their measured ratio of 2:1, really do originate from a splitting of the reactant H2O, rather than from adsorbed water, hydroxyl groups and lattice oxygen, stems from quantitative D2O and H218 isotope labeling studies. By monitoring the time evolution of the amounts of H2, HD, D2 and 16O2, 16O18O, 18O2, much detail was obtained about the surface chemistry (e.g., oxygen evolution, water adsorption, oxygen and hydrogen exchange, hydrogen formation) responsible for the photochemical-thermochemical water splitting reaction.5

A knowledgeable colleague who read this opinion editorial made an important point about the reported efficiency of this new water splitting process: Many papers on the thermochemical redox cycle have pointed out the critical energy penalty associated with maintaining a low pO2 (O2 partial pressure) during the reduction leg of the cycle, which can be achieved by applying vacuum pressure or by flushing using an inert gas. On checking the calculation of efficiency presented in the Supplemental Information of this paper it seems that the authors omit the energy required for pumping to vacuum pressures. In the main text of the paper one finds “The cell was then irradiated with solar simulated light (1 Sun) for different time intervals under a dynamic vacuum to remove generated O2”, however, they do not report the O2 partial pressure pO2, the most important operational parameter during reduction. As a best estimate this means the efficiency values are probably about 10x smaller than the reported one of 1%, which means this process has a way to go down the long and arduous road towards the development of a practical photochemical-thermochemical water splitting technology.

Despite this concern about the efficiency of the process, the practical realization of fuel production from solar energy is a big and important endeavor, there is still much work to do and the research described in this article represents an innovative first step down a new and interesting pathway.

Figure 2. Solar fuels machine that uses the heat and/or light from the sun to power H2O and CO2 splitting cycles to form synthesis gas H2/CO, enabled by switchable oxygen stoichiometry metal oxide materials. The synthesis gas can be used to make liquid fuels using known industrial processes, which could be driven by renewable sources of energy.

I’m excited about this advance in solar thermal, vapor-phase water splitting. The impressively mild solar thermal conditions that drive the water splitting cycle could lead to the discovery of new classes of metal–metal oxide nanocomposites that could enable the development of the type of “solar fuel machine” I envision in Figure 2. Perhaps the cycle could be run photochemically (lattice oxygen loss) at low solar power and photothermally (water oxygen abstraction) at higher solar power.

Obviously, while the heat is being turned down in the water splitting cycle, which I anticipate will find its way to the carbon dioxide splitting cycle, the development of a practical solar fuels machine is heating up!