An international research team have designed and developed a method for synthesizing photocatalysts with tunable heteroatom distribution. 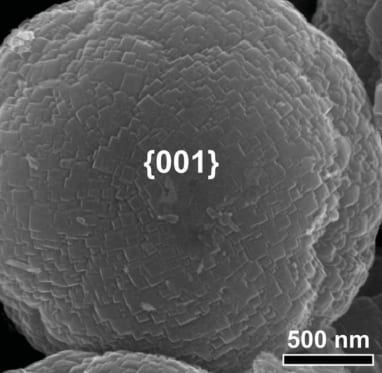 Understanding, and subsequently manipulating, key parameters to control the two half-reactions of photoinduced electron-reduction and hole-oxidation play a pivotal role in designing and constructing efficient photocatalysts. Although introduction of heteroatoms has been widely used to modify the electronic structure of photocatalysts with the dominant purpose of increasing visible light absorption, the underlying role of heteroatoms in tuning the photocatalytic reaction preferences has, unfortunately, been overlooked and is little understood.

A SEM image of one of the titanium dioxide microspheres synthesized in this experiment.

The challenge of studying such an important topic is to obtain photocatalysts with a tunable spatial distribution of heteroatoms while not changing other parameters. Now, an international collaboration between researchers at the Chinese Academy of Sciences and St. Andrews University in the UK has provided an innovative route, namely the acidic hydrolysis of TiB2, to prepare anatase TiO2 microspheres containing Bj– (j<2) in their core.

By simply heating the microspheres, the boron can diffuse from the core to the surface along [001] to form a ca. 50 nm shell with an interstitial Bs+ (s≤3) gradient. It is found that the preference for important photocatalytic hydrogen and oxygen producing reactions in water splitting can be sensitively switched by creating such a shell in the TiO2 microspheres.

This switching stems from the downward-shift of the electronic band edges of the shell by a band bending effect, whose origin is the extra electrons coming from the interstitial Bs+. These results create new opportunities for designing and constructing efficient photocatalysts by spatial heteroatom engineering.