Towards ideal growth of organic/inorganic hybrids

A group of scientists from Philipps-Universität Marburg have performed a careful and systematic study of organic film formation on molybdenum disulfide (MoS2) crystals. 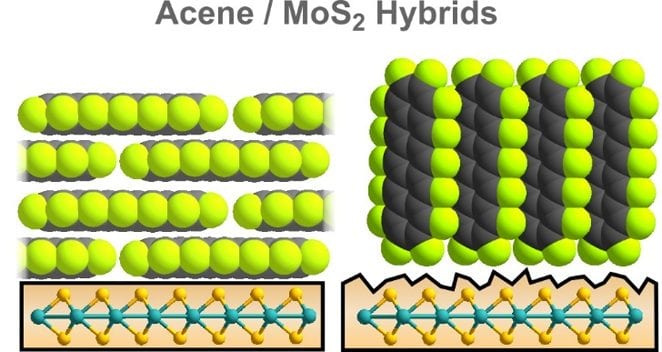 Recent progress in the emerging field of two-dimensional materials is currently making rather bold technological perspectives a reality. Of particular interest are the layered hybrid systems of two-dimensional materials and organic semiconductors where outstanding electronic properties are combined with the advantages of high photoabsorption and easy processing of thin films at large areas and low temperatures. However, the successful fabrication of state-of-the-art optoelectronic devices strongly depends on thin film morphology and the interface quality, which have been only slightly studied so far for the case of acene films on transition metal dichalcogenide (TMDC) substrates.

A group of scientists from Philipps-Universität Marburg have performed a careful and systematic study of organic film formation on molybdenum disulfide (MoS2) crystals. The molecular films of pentacene and perfluoropentacene grown by organic molecular beam deposition have been extensively analyzed by means of atomic force microscopy, X-ray diffraction, and near-edge X-ray absorption fine structure spectroscopy. For both organic semiconductors, crystalline thin films are formed on pristine MoS2 surfaces and the molecules adopt lying orientations due to epitaxial growth conditions. However, when the defects are intentionally created in the MoS2 substrate by ion sputtering, regions with upright molecular orientation are formed on the defective substrate.

Therefore, by applying various complementary techniques, the authors have established a clear correlation between the surface quality and the organic film growth. Acenes and TMDC substrates have been proven to be a suitable combination for preparation of well-defined organic/inorganic hybrids, provided a high structural quality of the substrate is achieved.

How is spacetime altered by entangled particles?
How does the structure of ice change around impurities?
High-speed plasma turbulence measured in nuclear fusion reactor for the first time
Dark matter could be composed of primordial black holes