Through the Looking Glass Transition: Structure–Property Relationships in Ionic Liquids

Glass transition temperature has been used as a guide to thermal stability in ionic liquids. 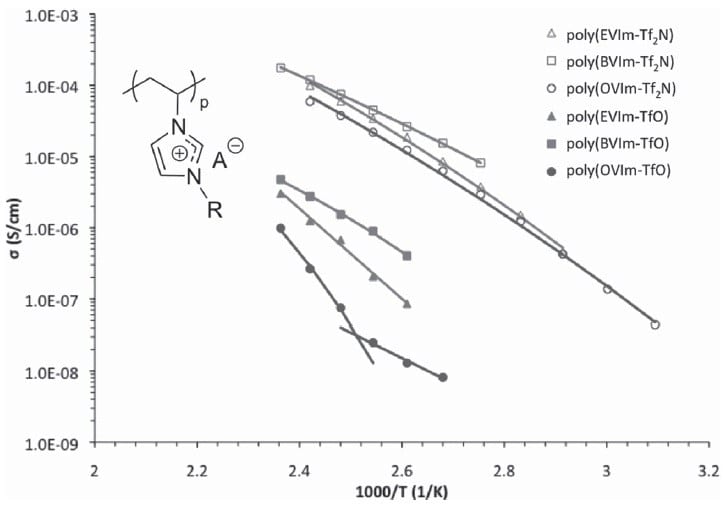 A solid understanding of structure–property relationships is important across all fields of materials research. It allows the properties and behaviour of the material to be entirely predictable once its structure has been determined. This is particularly critical for applications where unpredictable behaviour could have an adverse affect on the quality or lifetime of a product, or on human health.

Using a series of imidazolium homopolymers based on alkyl-substituted vinylimidazolium, researchers from America systematically investigated the effects of substituent length and anion size on the thermal stability and ionic conductivity of polymerised ionic liquids (PILS). They discovered that the glass transition temperatures of the PILS decrease and the weight loss onset increases as the anion size increases, independent of the length of the substituent.

In general, a greater thermal stability was observed for PILS with shorter substituents. However, for PILS with Br– and BF4– anions, the glass transition temperature was lowered by increasing the alkyl substituent length.

The ionic conductivity appeared inversely dependent on the glass transition temperature, which could be modelled using the Arrhenius equation and the VFT equation, which reveals the dependence of viscosity on temperature. The researches attribute this to a higher activation energy requirement for PILS with longer substituents. Importantly, enhanced ionic conductivities – over an order of magnitude – were observed for bulk PIL films in the presence of Tf2N– anions.

This also allowed the calculation of the activation energies for the ion-hopping mechanisms, to which ion conduction has been previously attributed in these systems.

This article is part of the special Best of Macros 2012 issue, and is now free to read at http://www.best-of-macros.de!