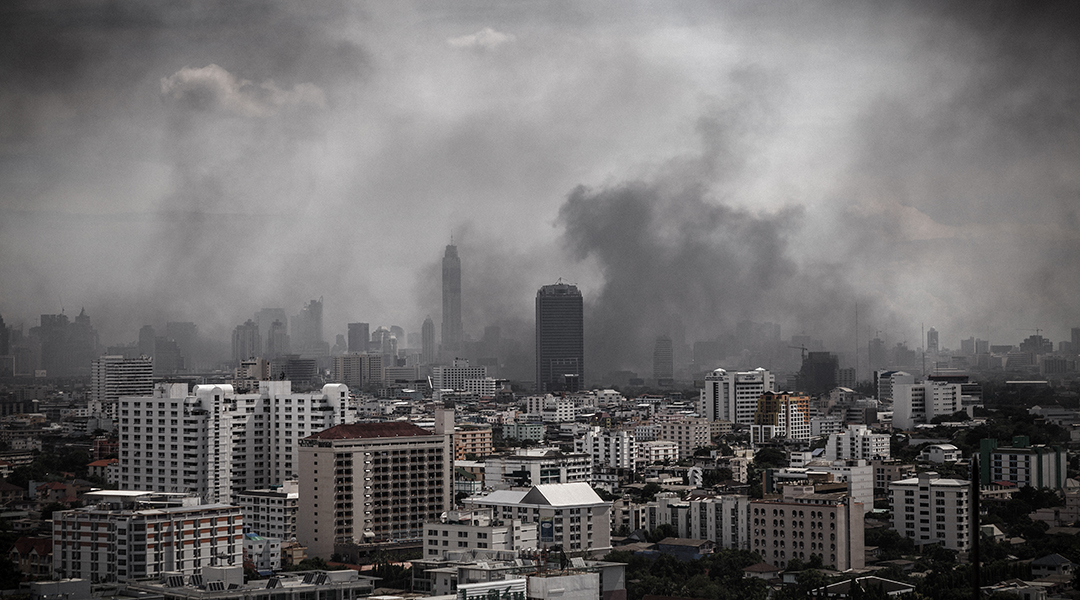 Air pollution is responsible for shortening people’s lives worldwide on a scale far greater than wars and other forms of violence, parasitic and vector-born diseases such as malaria, HIV/AIDS and smoking, according to a study published in Cardiovascular Research.

Professors Jos Lelieveld and Thomas Münzel, of the Max Planck Institute for Chemistry and the Department of Cardiology of the University Medical Centre Mainz in Mainz, Germany, who led the research, say the findings suggest the world is facing an air pollution “pandemic”.

Using a new method of modelling the effects of various sources of air pollution on death rates, the researchers estimated that globally air pollution caused an extra 8.8 million premature deaths a year in 2015. This represents an average shortening of life expectancy of nearly three years for all persons worldwide.

In comparison, tobacco smoking shortens life expectancy by an average of 2.2 years (7.2 million deaths), HIV/AIDS by 0.7 years (1 million deaths), diseases like malaria that are carried by parasites or insects such as mosquitoes, ticks and fleas by 0.6 years (600,000 deaths), and all forms of violence (including deaths in wars) by 0.3 years (530,000 deaths).

The researchers looked at the effect of air pollution on six categories of disease: lower respiratory tract infection, chronic obstructive pulmonary disease, lung cancer, heart disease, cerebrovascular disease leading to stroke, and other, non-communicable diseases, which include conditions such as high blood pressure and diabetes. They found that cardiovascular diseases (heart disease and cerebrovascular disease combined) are responsible for the greatest proportion of shortened lives from air pollution: 43% of the loss in life expectancy worldwide.

They also found that air pollution had a greater effect on shortening lives in older people, with the exception of deaths in children aged under five in low income countries, such as Africa and South Asia. Globally, about 75% of deaths attributed to air pollution occur in people aged over 60 years.

This is the first study to show the effects of air pollution on deaths according to age, type of disease and also its effect on life expectancy at the level of individual countries and regions.

Professor Jos Lelieveld, who is also from the Cyprus Institute Nicosia, Cyprus, said: “It is remarkable that both the number of deaths and the loss in life expectancy from air pollution rival the effect of tobacco smoking and are much higher than other causes of death. Air pollution exceeds malaria as a global cause of premature death by a factor of 19; it exceeds violence by a factor of 16, HIV/AIDS by a factor of 9, alcohol by a factor of 45, and drug abuse by a factor of 60.”

Prof Münzel said: “Since the impact of air pollution on public health overall is much larger than expected, and is a worldwide phenomenon, we believe our results show there is an ‘air pollution pandemic’. Policy-makers and the medical community should be paying much more attention to this. Both air pollution and smoking are preventable, but over the past decades much less attention has been paid to air pollution than to smoking, especially among cardiologists.

“In this paper we distinguished between avoidable, human-made air pollution and pollution from natural sources such as desert dust and wildfire emissions, which cannot be avoided. We show that about two-thirds of premature deaths are attributable to human-made air pollution, mainly from fossil fuel use; this goes up to 80% in high-income countries. Five and a half million deaths worldwide a year are potentially avoidable.

“It is important that policy-makers and the medical community realize that air pollution is an important risk factor for heart and blood vessel disease. It should be included as risk factor, along with smoking, diabetes and high blood pressure and cholesterol, in the guidelines of the European Society of Cardiology and the American Heart Association on the prevention of acute and chronic heart syndromes and heart failure.”

The researchers estimate that if air pollution was reduced by removing fossil fuel emissions, the average life expectancy worldwide would increase by just over a year, and by nearly two years if all human-made emissions were removed.

Prof Lelieveld said: “In Africa, air pollution represents a health risk that is comparable to HIV/AIDS and malaria. However, in most of the rest of the world air pollution is a much greater health risk. When we looked at how pollution played a role in several diseases, its effect on cardiovascular disease was by far the largest — very similar to the effect of smoking. Air pollution causes damage to the blood vessels through increased oxidative stress, which then leads to increases in blood pressure, diabetes, stroke, heart attacks and heart failure.”

The researchers used exposure data from a model that simulates atmospheric chemical processes and the way they interact with land, sea and chemicals emitted from natural and human-made sources such as energy generation, industry, traffic and agriculture. They applied these to a new model of global exposure and death rates and to data from the Global Burden of Disease, which included information on population density, geographical locations, ages, risk factors for several diseases and causes of death. They estimated the death rates and loss of life expectancy from different causes of air pollution compared to other causes of premature death for countries and regions around the world.

Limitations of the study include the fact there is uncertainty surrounding the estimates, so the size of the effect of air pollution on deaths could be larger or smaller. Nevertheless, such uncertainty also applies to other health risk factors, including smoking. More research is needed to understand fully the mechanisms involved in the associations seen between air pollution and a variety of diseases.

Numbers of deaths worldwide are taken from the Global Burden of Disease http://ghdx.healthdata.org/gbd-results-tool