The next step towards large-scale artificial photosynthesis 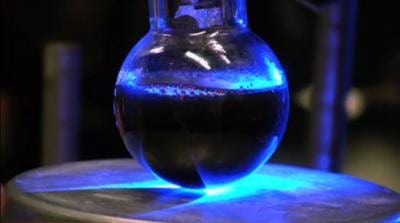 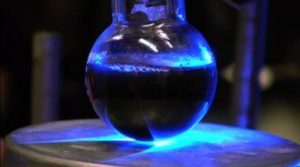 Nano-sized crystals of cobalt oxide, an Earth-abundant catalyst, have been shown to be able to effectively carry out the critical photosynthetic reaction of splitting water molecules. Photo by Roy Kaltschmidt, Berkeley Lab

Artificial photosynthesis, in which we emulate the process used by nature to capture energy from the sun and convert it into electrochemical energy, is expected to be a major asset in any sustainable energy portfolio for the future. Artificial photosynthesis offers the promise of producing liquid fuels that are renewable and can be used without exacerbating global climate change. A key to realizing commercial-scale artificial photosynthesis technology is the development of electrocatalysts that can efficiently and economically carry out water oxidation reaction that is critical to the process. Heinz Frei, a chemist with Berkeley Lab’s Physical Biosciences Division, has been at the forefront of this research effort. His latest results represent an important step forward.

“The oxidation of water to molecular oxygen is a four-electron process involving multiple steps,” Frei says. “We’ve obtained the first direct, temporally resolved observation of two intermediate steps in water oxidation using an Earth-abundant solid catalyst, cobalt oxide, that allowed us to identify the kinetic bottlenecks. With this knowledge, we can devise and design improvements on the cobalt oxide catalyst and its support environment to partially or completely remove these bottlenecks and improve the efficiency of water oxidation.”

In an artificial photosynthetic system, the oxidation of water molecules into oxygen, electrons and protons (hydrogen ions) provides the electrons needed to produce liquid fuels from carbon dioxide and water. This requires a catalyst that is both efficient in its use of solar photons and fast enough to keep up with solar flux in order to avoid wasting those photons. It should also be robust and affordable on a large-scale. Five years ago, a study led by Frei identified cobalt oxide in the form of single crystal nanoparticles as an excellent candidate for meeting the challenge. However, realizing the full catalytic potential of cobalt oxide nanocrystals requires a better understanding of the individual events in the four-electron cycle of water oxidation.

“Prior to our study, it was not known whether the catalysis, which takes place on the surface of the cobalt oxide crystallites, happens at every cobalt center on the surface at the same speed, or whether a subset of cobalt sites does most of the work while other subsets are slow or merely spectators, Frei says. “Our results show that there is a subset of fast sites where a considerable fraction of the catalysis takes place, and a subset of sites where the catalysis proceeds considerably more slowly. This discovery of these fast and slow sites and the proposed structural difference between two provides the basis for designing cobalt oxide surfaces with higher concentrations of fast sites.”