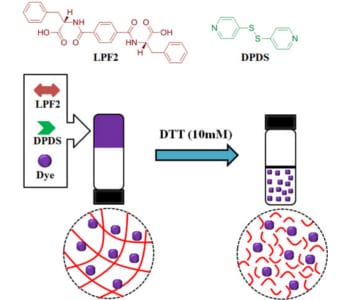 Stimuli-responsive hydrogels have attracted increasing interest due to their potential application in the biomedical field, for example as drug delivery carriers. A highly efficient and biocompatible trigger for release from hydrogels is a change in reduction-potential which is a unique and ubiquitous signal in cancer cells and tumor tissue and can lead to a rapid and efficient drug release. Therefore, the design of hydrogel systems with easy production and fast response to reducing stimuli are an active area of research.

1,4-dithio-DL-threitol (DTT), glutathione tripeptide (γ-glutamyl-cysteinyl-glycine; GSH) and tris(2-carboxyethyl) phosphine (TCEP) are commonly used as disulfide-cleaving agents in a biological context. As a cellular reducing agent，the concentration of GSH (2-10 mM) in the cytosol is 100-1000 times higher than that in the extracellular fluids and circulation (about 2-20 μM). In tumor cells the GSH concentration is at least four times higher compared to normal tissues and disulfide bonds of a nano-vehicles can be cleaved, leading to the disassembly of the vehicle and the subsequently release of an anticancer drug. 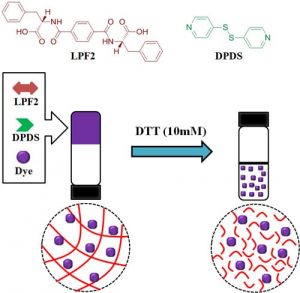 At Shanghai Jiao Tong University, Prof. Chuanliang Feng and co-workers are working on novel stimulus-responsive hydrogels self-assembled from low-molecular-weight gelators and their applications in controlling cell adhesion. Recently, they have successfully explored a novel and easy approach to construct biocompatible, redox-responsive supramolecular hydrogels co-assembled from two small organic molecules to encapsulate dyes. Furthermore, the disulfide-containing nanofibrous hydrogel is able to control the release of encapsulated dyes in response to reductive conditions mimicking the intracellular environment of tumor tissue.

This work provides a novel and simple strategy for preparing redox-responsive supramolecular hydrogel, which may pave a new way to easily fabricated stimulus-response nanomaterials.