Levkin and co-workers developed an advanced version of cell microarrays by creating patterns of superhydrophilic spots separated by superhydrophobic borders on a surface. 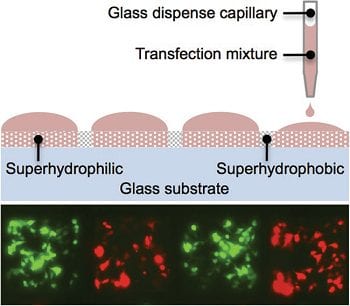 Living organisms are very complex and there is still a lot to learn about their normal physiology as well as when disease occurs. To investigate and understand the function and mechanism of molecules, proteins, and chemicals in biological systems, combinatorial screening of cells can be performed. The combination of different experimental conditions, probes, controls, and replicates can quickly generate hundreds or thousands of testing conditions. Performing that many experiments in petri dishes or even multi-well plates requires a lot of resources, money, reagents, and consumables.

In the last 15 years, scientists have started to use cell microarrays to efficiently and economically screen thousands of probes at once in a miniature and parallel format. Typical cell microarrays are formed by culturing cells on glass slides that are printed with arrays of test mixtures containing extracellular matrix proteins to encourage the cells to grow in patterned clusters. However, the cells can still potentially move between the neighboring spots and it is difficult to distinguish the cells that have been affected by the test mixture from the cells in the background. Also, uncontrolled variability of the spot sizes and resultant concentration of the printed mixtures due to varied liquid-surface interactions can affect the reproducibility of the results. 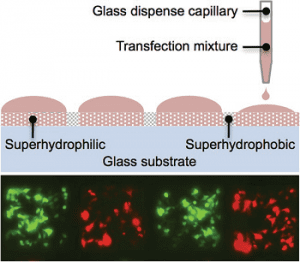 Levkin and co-workers developed an advanced version of cell microarrays by creating patterns of superhydrophilic spots separated by superhydrophobic borders on a surface. By controlling the wettability patterns on the surface, solutions could be printed on individual superhydrophilic spots and confined by the surrounding superhydrophobic borders, which allowed for even higher spot densities. In addition, the surface wettability was used to control the patterning of cells. Cells preferred to adhere and grow within the superhydrophilic spots while the superhydrophobic borders deterred cells from migrating outside these spots. The unique wetting properties of this advanced microarray were used instead of physical walls to contain cells and solutions. These microarrays are versatile: substances can be printed on the surface or chemically bonded to the surface and the interactions and effects on the cell can be studied. Levkin and co-workers demonstrated that their cell microarrays can be used for reverse transfection experiments, and investigated and optimized factors that affect the efficiency of gene expression and cell death. Cell microarrays, used together with advanced automated technologies such as pipetting robots, screening microscopes, and image analysis software, can be used to perform high-throughput and high-content cell screenings to systematically discover and investigate the function and action of biological molecules.